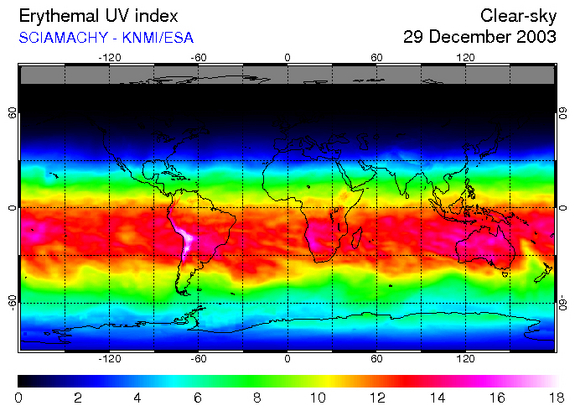 A "perfect storm" of ozone-destroying chemicals sent cancer-causing UV-B radiation soaring at the top of a South American volcano in 2003, a new study reports.

On Dec. 29, 2003, a world-record UV index of 43.3 was detected at Bolivia's Licancabur volcano. The UV index is used to forecast the strength of the sun's ultraviolet rays.

A radiation detector left on the 19,423-foot-tall (5,920 meters) peak picked up the extreme spike in UV-B radiation during the Southern Hemisphere summer. A UV index of 43 is more similar to surface radiation on Mars than typical conditions on Earth, and the reading is well above the mid-20s routinely measured in the high Andes, said lead study author Nathalie Cabrol, a planetary scientist at the SETI Institute in Mountain View, California.

Earlier studies by Richard McKenzie, a scientist at the National Institute of Water and Atmospheric Research in New Zealand, also found that the high Andes in Peru, Bolivia, Chile and Argentina regularly hit UV index levels higher than 25.

In the Andes, intense tropical sun, high elevation and naturally low ozone levels combine to boost UV radiation to record heights. But modeling of atmospheric conditions in December 2003 suggests an unusual combination of factors combined to send protective ozone levels plummeting, the researchers reported. The ozone layer in the stratosphere, the layer above the troposphere that people breathe and live in, blocks the sun's UV radiation. [See Earth's Atmosphere from Top to Bottom (Infographic)]

"It seems to be a perfect storm," Cabrol told Live Science.

Once in a lifetime?

Radiation monitoring instruments called dosimeters show that UV-B levels were in the 20s in the days before the record high, and hit the 30s in January 2004. The researchers think seasonal thunderstorms over the Andes and fires burning in the Amazon could have depleted protective ozone, along with an atmospheric train of ozone-depleting chemicals streaming north from Antarctica. A large solar flare from the sun two weeks before the spike also could have affected atmospheric chemistry and destroyed some the planet's protective ozone layer.

Cabrol and her colleagues don't know whether there have been similar spikes in the years since the record UV peak, or if other Andes volcanoes may see extremely high UV-B radiation hits. "We need a lot more data to answer this question," Cabrol said.

The World Health Organization warns against spending time outside when the UV index tops 12. This is because higher UV index numbers mean people are exposed to greater doses of skin- and eye-damaging UV radiation.

The UV index measures the amount of damaging ultraviolet solar radiation expected to reach the Earth's surface when the sun is highest in the sky, generally between the midday hours of 10 a.m. and 2 p.m. The amount of UV radiation is typically determined by the sun's position in the sky, ozone levels and cloud cover. UV levels peak in summer and are lowest in winter.

Cabrol and her colleagues didn't set out to find record-high UV levels when they visited Licancabur volcano in the 2000s. Instead, they were searching for environments on Earth that were similar to Mars. [7 Most Mars-Like Places on Earth]

During the NASA-funded project, Cabrol and her colleagues explored high-elevation lakes in the Andes for insight into how life evolves in extreme environments. Licancabur volcano's summit lake was probed for its similarities to Gusev Crater on Mars, the landing site for NASA's Mars rover Spirit in 2004.

Because the team's primary goals were to look for Mars counterparts and weird life, such as the extremophiles that thrive in these harsh environments, they didn't realize their instruments had picked up a huge spike in UV levels until years after their fieldwork was complete. And, at first, the values were so high that they thought the UV data was the result of an instrument error, Cabrol said. But two dosimeters placed more than 6 miles (10 km) apart saw the same peaks at the same time, she said.

Cabrol said the team wanted to verify their observations with a return visit, to retrieve more monitoring data from Licancabur, but political instability in Bolivia prevented another trip.

Cabrol thinks a UV monitoring program in the Andean countries, similar to those already in place in Australia and New Zealand, would shed more light on the extreme UV levels at high altitudes, and offer better protection to people living on the Altiplano.

"If we had a way of monitoring these events and better understanding [of] how they are created, then we could develop an alarm system so people could stay inside and be protected," Cabrol said.

The new results were published today (July 8) in the journal Frontiers in Environmental Science.

What does it take to get a gig at Google?
Thanks for reading CBS NEWS.
Create your free account or log in
for more features.
View CBS News In
CBS News App Open
Chrome Safari Continue
Be the first to know
Get browser notifications for breaking news, live events, and exclusive reporting.