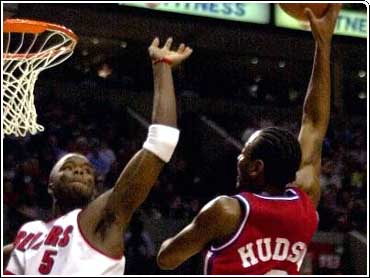 The All-Star break might be just what the Portland Trail Blazers need.

Arvydas Sabonis scored 23 points as Portland held on to the NBA's best record by beating the Los Angeles Clippers 107-100 on Wednesday night.

"It took being down 18 for us to get in the game," Damon Stoudamire said of the Blazers' sluggish start, which came after Portland returned from a four-game, five-night East Coast road trip. "The All-Star break is coming at the best possible time."

Steve Smith added 17 points for the Blazers, who won their 11th straight home game and improved to 38-11 overall. The Los Angeles Lakers stayed a half-game behind the Blazers after beating the Minnesota Timberwolves.

"Taking people too lightly is a big problem, and tonight we really put ourselves at risk," said Blazers coach Mike Dunleavy, whose players didn't want any part of his scolding after the game.

"When I came in the locker room they were all in the shower and they hollered back, 'We're on our break,' " Dunleavy said. "I told them, 'We started our break at 7 p.m."'

Hudson scored 16 on 4-of-5 3-point shooting in the first quarter as the Clippers took a 38-20 lead. The Blazers trailed by as many as 18 in the second quarter and 10 at halftime before starting the third quarter with a 16-2 run.

"A win is a win," guard Greg Anthony said. "We showed a lot of pride coming back after being not ready for them early."

Rasheed Wallace had 15 points and 13 rebounds for the Blazers, and Detlef Schrempf added 15 points.

The Clippers have lost five in a row and 15 of 16. They fell to 0-3 under interim coach Jim Todd, who stepped in when Chris Ford was fired last Thursday.

"The mission tonight was to come in and steal a win, and I thought we were going to do it," said Lamar Odom, who had 16 points. "But they are a veteran team, and as soon as you let them breathe, they bite you."

The Blazers turned it around in the third after trailing 55-45 at halftime.

Sabonis had 15 points in the quarter, and his dunk tied it at 57. Wallace gave the Blazers their first lead at 59-57 with a turnaround jumper with 7:03 left in the third. Los Angeles didn't quit, and a 3-pointer by Hudson at the buzzer put the Clippers up 79-77.

The Blazers didn't have any turnovers in the third quarter after committing nine in the first half.

The Clippers ran out to a quick lead, capitalizing on seven Blazers turnovers in the first quarter. Hudson's third 3-pointer put Los Angeles up 29-16.

The Blazers came back in the second quarter. Damon Stoudamire, who sat at the end of the Blazers' bench sulking with his jersey off after Dunleavy put Anthony in to guard Hudson, hit a deep jumper, and Schrempf sank two free throws to cut it to a 10-point deficit.

"The Clippers were great early," Stoudamire said. "They hit just about every shot, but we were able to get back in the game. Everybody in this league is good enough to play on any night."

Wallace hit a bank shot with just under a minute left to cut the lead to 50-45, but the Clippers pushed the lead back to 10 points as Lamar Odom hit a wide-open 3-pointer and Eric Piatkowski hit a fast-break layup.