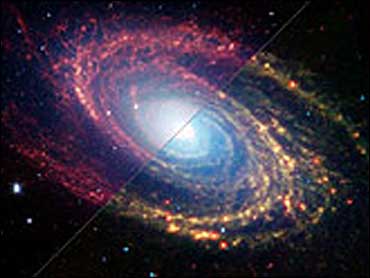 To examine data on the universe's earliest stars and galaxies from a balloon-launched telescope, scientists had to fend off earthly creatures in the Canadian Arctic.

The telescope landed there by parachute Saturday and was quickly surrounded by wildlife.

"The secret of our universe's beginnings was being protected by caribou and polar bears," said John Kageorge, communications manager for AMEC Dynamic Structures Ltd. in this Vancouver suburb. "As it turns out, the scientists needed to go back with a rifle to protect themselves."

The AMEC-designed Balloon-Borne Large Aperture Submillimeter Telescope, or BLAST, was launched by NASA in northern Sweden and floated about 25 miles in the upper atmosphere for four days, then was dropped by parachute.

Scientists were able to extract the computer from the telescope and confirm the data is safe. NASA's national scientific balloon facility recovery team will recover the 5,940-pound telescope itself in the next few days, Kageorge said.

BLAST was designed to detect microwaves from billions of years ago "that are just now coming to earth," Kageorge said.

He said it was the first time such a sophisticated telescope was taken up in a balloon and the balloon was the largest of its kind, at 396 feet high and 462 feet in diameter.

Mark Devlin, a professor at the University of Pennsylvania who is leading the studies, said the telescope "will address some of the most important cosmological and galactic questions regarding the formation and evolution of stars, galaxies and clusters."