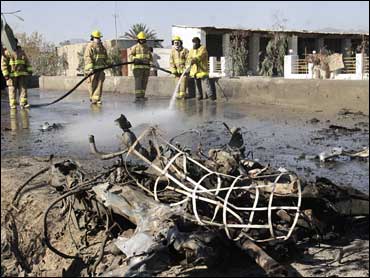 A roadside blast struck a NATO military convoy in eastern Afghanistan on Wednesday, killing two soldiers and wounding three others, the alliance said.

NATO did not identify the nationality of the killed and wounded soldiers or the exact location of the blast. Most of the troops in the country's east are American.

According to the report, the Taliban claimed the attack took place in the eastern province of Wardak, but no date was mentioned. The video, shot from atop a snowy mountain, shows a convoy of military vehicles, some of which appeared to be Humvees, driving along a mountain road when a large explosion goes off at the side of the road.

The Taliban claimed to have killed three NATO troops in the attack.

CBS News cannot confirm the authenticity of the Taliban video, or whether the attack shown in tape was related to the deaths reported by NATO command Wednesday afternoon.

Earlier, British Prime Minister Gordon Brown said ex-Taliban fighters in Afghanistan can win a role in the country's future if they renounce violence.

"If they are prepared to renounce violence and abide by the constitution and respect basic human rights then there is a place for them in the legitimate society and economy of Afghanistan," Brown told lawmakers at the House of Commons.

He said Britain would not hold direct talks with ex-Taliban fighters, but support the attempts by Karzai's officials to widen Afghanistan's political sphere.

Britain is backing Afghan efforts to identify members of the Taliban - particularly midlevel commanders - who are prepared to participate in mainstream politics, a senior government official told reporters. He spoke on condition of anonymity in line with government policy.

(AP Photo/PA)
"Already some 5,000 fighters have laid down their arms," said Brown, seen at left. British officials said 70 high- or middle-ranking Taliban leaders have been killed this year.

Meanwhile, more than 50 Taliban fighters who fled a key southern Afghan town were killed during a two-day battle as the militants tried to attack a nearby government center, Afghanistan's Defense Ministry said Wednesday.

The battle - fought by Afghan soldiers aided by NATO airstrikes - took place in Sangin, Helmand province. Sangin neighbors Musa Qala, which Taliban fighters had controlled since February but abandoned this week in the face of an offensive by Afghan, British and U.S. forces.

"When the terrorists were defeated in Musa Qala, they escaped to Sangin and started firing in and around Sangin," the Defense Ministry said.

Among the 50 militants killed were three foreigners and three commanders, the ministry said. It said no civilians were hurt or killed in the operation.

There was no way to independently verify the death toll on the remote battle site, and NATO's International Security Assistance Force does not release casualty figures for militants.

In other violence, a suicide attacker blew himself up near an Afghan army convoy in the southern city of Kandahar, killing one person, said the provincial police chief, Sayed Agha Saqib (aftermath seen at left). Two soldiers and four civilians were wounded, he said.

This year has been the deadliest since the U.S.-led invasion in 2001. More than 6,200 people have been killed in insurgency-related violence, according to an Associated Press tally of figures from Western and Afghan officials.

Brown also said Wednesday that Britain will keep a force of around 7,800 troops in Afghanistan for the long term, without specifying a limit on how long soldiers could remain.

Some British military chiefs have suggested troops will be required for decades.

Brown's office said he would not set a timetable for changing troop numbers, saying Britain will stay in Afghanistan until it achieves security.

But Brown told lawmakers a rising number of newly trained Afghan soldiers - expected to reach 70,000 next year - and EU and NATO allies must do more to share the burden of winning peace.

He said new commitments from Denmark, France, Germany and others were welcome. "This progress must, I believe, now be matched by contributions from other counties in NATO, the EU and beyond," Brown said.

Officials say the Afghan National Army will not operate autonomously until 2012 and is expected to require international support for some time afterward.

Brown said a United Nations envoy tasked with coordinating aid and reconstruction will likely be appointed by February.

Britain has pressed U.N. Secretary-General Ban Ki-moon to appoint an individual with international clout and access to leaders in European capitals and the region, including Pakistani President Pervez Musharraf, the official said.