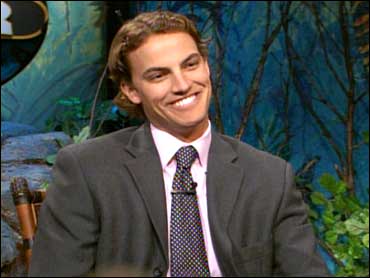 "I completely got blind sided," Blake tells The Early Show co-anchor Rene Syler. "It didn't make sense to me. I left the game like how did that happen."

It was Brian Corridan's strategy to "bait Blake" in front of the other tribe mates hoping with the stories he shared they would see "what a moron Blake is."

In his defense, Blake points out he was not talking all the time. "This is 72 hours they shot in 45 minutes. This is happening over a three-day period.

"The hardest part about 'Survivor' is the monotony of the days. The 12 to 5, where it is 120 degrees and mosquitoes, and all you want to do is be home with your family.

"You don't have a TV. You don't have music. Somebody talks. Every once in a while someone would entertain. Amy would be swearing, or a crocodile would come by, and you make a conversation. Half of the time you are sitting around bored."

Police sergeant Amy O'Hara nicknamed him Golden Boy saying no matter what, Blake would come out smiling and smelling like roses.

But in a scene shown exclusively on The Early Show, Brian had a different take on Blake. This is what in a close-up, away from the rest of the team, Brian said to the cameras about the castoff:

He's got this perfect smile, and model hair and body, and everything he touches turns to gold, which isn't true anyway. So Amy calls him Golden Boy because she has a crush on Blake. It makes me vomit because Blake is one of the most egotistical. When he opens his mouth you can be sure almost 90 percent it's going to be about Blake. If you can feed Blake's ego, he likes it, and if he knows you're an ego stroker, he will like you better. That's fine with me. I don't care. But it's ridiculous. It's dumb as hell.

What does Blake think about that?

"It's hard looking at it from my perspective," Blake tells co-anchor Harry Smith. And with a smile, he adds, "A lot of Thursday nights at the bar after watching 'Survivor.'"

It is, however, a matter of opinion. "I'm proud of myself," Blake says. "People who spent time with me afterward said, 'you're such a humble person.' I'm talking about myself now, but in the game you don't get portrayed as you always are. I want to come away with more than a million dollars, with my honor and integrity. And I did that."

As for Brian, he says, "Everybody on the cast, everybody thought that Brian was gay and made it a big issue and a big hot topic, and he was adamant about defending himself on that. Never once, did I speak a bad word about Brian. They had me in interviews, and he's not gay. Brian and I are the two, the exception to the rule. I try to be a good guy for everybody."

So why was he so forthcoming bragging for example about his girlfriend's bra size?

"They showed me as forth coming," Blake says. "Amy would talk about things they probably wouldn't talk about in private company. We had some pretty interesting conversations. Some of it is probably not appropriate for that family hour."

The social aspect is the part of the game that is easy to underestimate, points out Rupert Boneham, the most popular "Survivor" and winner.

"You forget about the social side of 'Survivor.' You don't really understand when you start talking about yourself and how other people around you see you," Rupert says offering his insight. "And you have those people. You had Brian. I had little Johnny rotten who just kind of feeds you and push you into talking about yourself, telling different things. I was yelling at the TV last night saying: You got to stop it. You got to back it down."

Blake says at the beginning his strategy was to stay under the radar. But fate had a different plan.

"The tree fell on me the first hour of the game," he points out. "I was blacking out. They were holding me down. She (nurse practitioner Margaret Bobonich) is pulling these thorns out of my shoulder. I still have two in right now. The skin grew over by the time I was done. They never took it out. That slowed me down a bit. I was just going through process of the game. I mean, every athletic competition I stepped it up. That was the most I could do at that point."

After the shuffle, Blake was supposed to be safe having Danni Boatwright, Bobby Jon Drinkard and Brandon Bellinger from his original tribe, outnumbering Gary Hogenboom, Ami, and Brian. So why did Danni cast her vote against him?

"It made sense," Blake says. "I'm a guy. I'm sitting there with Brandon, Bobby John, jocks winning challenges. Let's take the four of us strong people to the end and figure it out. All is fair in love and war. It totally made sense to me. I know I had Brandon to the end. Brandon was supposedly just devastated the next day, and Bobby John I know he flipped at the end. To me it didn't make sense. I had talked previously with former 'Survivors,' and they said it's all in the odds. You see Brandon, Bobby Jon and I go to the bathroom together in the woods."

Perhaps too much information, Syler notes.

So does two-time Survivor player, Stephenie LaGrossa have a chance to win this game?

"I think Stephenie has a chance to make it to the merge," Rupert says, that is if she "doesn't change her attitude.

As for Gary, Rupert says his lie is going to cost him at the end.