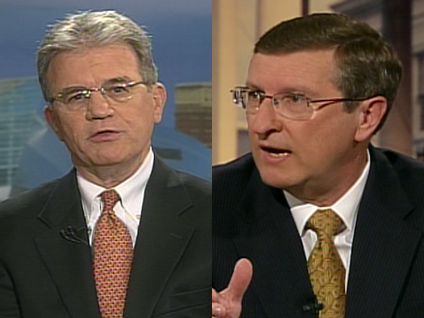 Since becoming "Survivor"'s newest and most popular millionaire, Rupert Boneham has been spending more time on the racquetball court, but how has Rupert been spending his fortune?

"With a million dollars, a pirate is very happy to adjust in Indiana," he tells The Early Show correspondent Tracy Smith, who recently caught up with him.

For starters, how about a new home with all new furniture, including a new bedroom for him and his wife?

"No more sleeping on the bamboo and killing myself, the mattress that we had was a hand-me-down, hand-me-down." Rupert notes and continues the tour of the house, showing Smith the new room of his daughter, Raya (as well as that of Wally the alligator).

And the list goes on. Excited, Rupert's wife, Laura, notes, "I got a new washer and dryer; I have a wonderful dishwasher; I have a guy who mows the lawn."

And, like Rupert, she earned it. How many wives eat fish heads for their husbands?

Rupert took care of the other woman in his life as well, by paying off his mother's home, where she helps handle the fan mail.

And who can Rupert count among his many fans? The mayor of Indianapolis, who declared June 21 Rupert Day.

"He represented our city so well," Mayor Bart Peterson says. "It is a great honor for us to be able to claim you, Rupert. Good guys do finish first and that's what happened here in this city."

But Rupert Boneham was a hero in Indianapolis long before he became America's most beloved "Survivor." For over five years, he mentored troubled teens at the Choices program and with the skills he taught them, many have turned their lives around.

Charles Berry, who was mentored by Rupert, says, "Three years ago, I was not that good of a kid. I got in a lot of trouble. I don't get in trouble anymore. I'm just living a normal life."

On The Early Show, he tells co-anchor Harry Smith, "Choices has stood with me for years when I was on my own, doing my own kids' group, and it about bankrupted me. Choices stepped in, helped me out, gave me kids through the Department of Education and the Department of Corrections, and it was a good match-up. And I always said I'd be with them as long as I could. This makes it so I can be with them forever."

And now, Choices is helping Rupert set up his own charity. Besides the fan mail, Rupert points out his mom will be helping him out with his program, Rupert's Kids. "She has retired to help me with the fan mail and the charity requests that we get and then dealing with our charity, Rupert's Kids," he says.

So does he have any money left? "You know, after doing all that and setting my daughter up with the college fund where she can go anywhere in the world when she turns 18, no matter what happens to Laura and I, and paying the government, you know, a million dollars goes very quickly," he says.

Rupert says, "I'm making sure that Laura and Raya and I all do
live happily ever after with helping my little group of people around me too.
So it's amazingly good."

But don't expect to see Rupert much these days sporting his tie-dyed shirt. Now, he says, he dresses up a bit more. "The kids, the people, everybody recognizes me, you know, but I love that. I love that."

He loves it so much, he would love to be back on TV. He says, "There's a few different things out there that we're talking about doing. I'm trying to get back on TV. As long as I can go out there and be myself. I want to be able to be myself, because I know I'm not an actor. I'm just me."