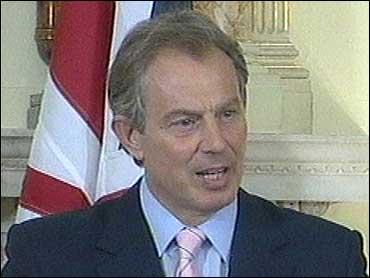 Prime Minister Tony Blair said Thursday he hoped that London would return to normal "as soon as possible" after explosions struck three Underground stations and a bus at midday.

"We can't minimize incidents such as this," Blair said during a news conference with visiting Australian Prime Minister John Howard. "They're done to scare people, to frighten them and make them worried."

One injury was reported in the Thursday

Blair said the police and security services were "fairly clear" on what happened and what the next steps were, and it was "important to respond by keeping to our normal lives."

He said it was too early to speculate on who might be responsible for the attacks.

Howard told Blair that Australia would remain a "steadfast partner" with Britain in the fight against terrorism.

As Blair prepared to deliver his statements Thursday, police escorted a man away from his Downing Street residence.

A police officer near the end of the street drew a firearm and aimed it at a target beyond the range of television cameras. Another officer then led away a man whose black shirt was undone. The man also wore black trousers and appeared to be of Asian or Middle Eastern origin.