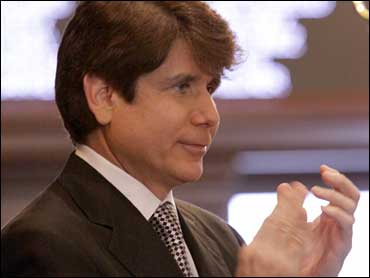 Impeached Gov. Rod Blagojevich presided Wednesday over a tense swearing-in of the state Senate that must ultimately decide whether to oust him, telling the lawmakers he hopes they will "find the truth and sort things out."

The Democratic governor was greeted by silence as he entered the Senate chamber through a back entrance, took the podium without introduction and banged a gavel to call the session to order. He mostly stuck to the formalities of overseeing the ceremony during the hour or so he presided over the chamber.

Meanwhile, lawyers for Blagojevich received a summons for his impeachment trial from the state Senate. Spokeswoman Kelley Quinn said the governor's legal team accepted the summons from the Illinois Senate's sergeant-at-arms.

The Senate also approved rules for the trial, which is to begin Jan. 26. The rules govern issues such as issuing subpoenas. They also allow a majority of senators to override rulings by the judge.

Blagojevich, who is accused of trying to auction off President-elect Barack Obama's U.S. Senate seat, politely applauded as he welcomed by name several of the same state officials who have called on him to resign. Among them was Lt. Gov. Pat Quinn, who would become governor if Blagojevich is removed from office.

But as he handed the proceedings over to incoming Senate President John Cullerton, a fellow Democrat from Chicago, Blagojevich said he hopes senators will "find the truth and sort things out, to put the business of the people first."

Blagojevich, who quoted British poets in his last two public appearances since his arrest, turned this time to a favorite of Illinois politicians, Abraham Lincoln, calling on state senators to act "with malice toward none, with charity for all."

The reference is from Lincoln's second inaugural address, delivered near the end of the Civil War, when he implored his countrymen to "bind up the nation's wounds" and work toward peace.

While moving to elect Cullerton the new Senate president - and with Blagojevich still presiding - Sen. Lou Viverito called the governor's upcoming impeachment trial one of many challenges facing the state, pointing out Cullerton's stellar ethics record.

"Today we have the opportunity to make one significant and meaningful step toward ... restoring the public's trust," said Viverito, a Democrat from Burbank.

The Illinois House impeached Blagojevich last week on a 114-1 vote, more than a month after his Dec. 9 arrest on federal corruption charges. New House members also sworn in Wednesday reaffirmed the vote, with the governor's sister-in-law as the only dissenting vote.

Rep. Deborah Mell, whose sister is married to Blagojevich, is a freshman Democratic representative from Chicago.

"Our Inauguration Day is traditionally a day exclusively for celebration, but the oath we've just taken requires that we immediately take up the issue of the governor's lack of fidelity to the state constitution and its laws," Democratic Rep. Barbara Flynn Currie said before Wednesday's vote.

Illinois House Speaker spokesman Steve Brown said the second impeachment vote was needed because the previous chamber's vote had expired, and legislators wanted to be sure the move stands for the upcoming Senate trial.

Secretary of State Jesse White, a fellow Democrat who had refused to certify Blagojevich's appointment of Roland Burris to the U.S. Senate, presided over the swearing-in of the new Illinois House. White had refused to sign Burris' certification papers because of the criminal allegations against Blagojevich.

On Monday, eager to put the scandal-tainted standoff behind them, Senate Democrats accepted Burris as Mr. Obama's Senate successor and said they expect to swear in the new Illinois senator soon.

At the Illinois House ceremony Wednesday, Republican state Rep. William Black praised White for standing firm, saying: "In the last few days, sir, you have been a profile of courage, and I thank you."

Blagojevich is the state's first governor to face an impeachment trial and the first public official since a circuit judge in 1833 was impeached but acquitted.

Cullerton said he hoped to move quickly with the impeachment trial and finish by Feb. 4.

"You don't want to have the cloud of an impeachment trial hanging over the normal, regular legislative session," he said.