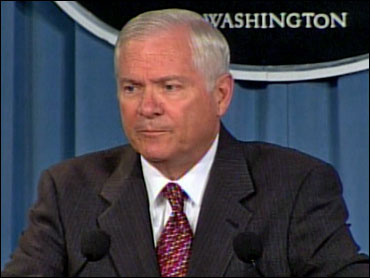 Unhappy with the Pentagon's oversight of its private contractors in Iraq, Defense Secretary Robert Gates has dispatched a fact-finding team to probe further into the problem, officials said Wednesday.

The Pentagon also disclosed that for several months it has been developing additional guidance for American commanders and other senior defense officials on how the Uniform Code of Military Justice can be used to discipline contractors. Prior to October 2006 the code did not apply to contractors.

There are about 7,300 private contractors working for the Pentagon in Iraq, of which about 5,000 are guarding fixed sites of importance to the U.S. military or the Iraqi government, according to Pentagon figures. The contractors are immune from Iraqi law, and none has been prosecuted under the Uniform Code of Military Justice, according to Pentagon press secretary Geoff Morrell.

Morrell said Gates began asking questions about the military's relationship with its contractors after 11 Iraqis were killed Sept. 16 in a shooting involving Blackwater contractors protecting a U.S. diplomatic convoy in Baghdad.

The Blackwater employees in that case were working for the State Department.

"He's asked some early questions, he's received some early answers," Morrell said. "Those answers, at least when it comes to the oversight component, have not been satisfactory."

Morrell would not elaborate on what Gates found unsatisfactory.

"He has some real concerns about oversight of contractors in Iraq and he is looking for ways to sort of make sure we do a better job on that front," Morrell told reporters at the Pentagon.

As a result, Gates sent a five-person team to Iraq on Sunday to "talk to all the key players," including Gen. David Petraeus and Lt. Gen. Ray Odierno — the top two U.S. commanders there — and obtain additional details for Gates by the end of this week, the press secretary said.

Also, Deputy Defense Secretary Gordon England issued a memorandum to commanders on Tuesday spelling out what authority they already have to ensure that private contractors comply with U.S. rules, Morrell said.

The memo tells the commanders that they have the authority to ensure that all security contractors are authorized and trained to carry weapons and that none has unauthorized weapons or ammunition, he added.

The memo alluded to the Sept. 15 Blackwater incident without mentioning the contractor by name and said that the shooting of civilians "identified a need to better ensure" that Pentagon policies are being followed by its contractors.

England also told commanders to ensure that contractors have been informed that any contracting personnel who are suspected of having committed a felony act or of having violated U.S. military rules on the use of force will not be allowed to leave Iraq unless the commander first approves of it.

Critics have cautioned for years that the Pentagon was counting too heavily on private security contractors.

"Many outsiders have predicted since the war began that the reliance on contractors — especially security contractors — was going to eventually produce problems, and now it has," said Loren Thompson, a defense expert at the Lexington Institute, a think tank.

"The nature of the war does not encourage anybody to pay close attention to what local laws require," he added. "When you're in an environment where the Shiite militias and the Sunni insurgents are paying no attention at all to the law, there's always a rationalization for American forces ignoring it, too, and that's doubly true in the case of private contractors."

Meanwhile, Democratic Rep. Henry Waxman, chairman of the House Oversight and Government Reform Committee, is complaining to Secretary of State Condoleezza Rice about the alleged muzzling of State Department officials in inquiries involving Blackwater, and Iraq's government. (Read more) Waxman said the State Department had told the committee that State employees could not discuss potential corruption in the al-Maliki government unless the information would be treated as a national security secret.

The private comment, relayed on condition of anonymity to The Associated Press by the official who was present at the closed meeting between the two men, reflected the challenges confronting Mr. Bush and al-Maliki as they met on the sidelines of the U.N. General Assembly on Tuesday.

Both are under pressure from their respective citizens and lawmakers to prove that the U.S.'s continued presence is justified in the wake of a political and security situation that, on the surface, shows little sign of improvement four years after Saddam Hussein's regime was toppled.

In their public remarks, however, the two leaders sounded a unified voice after their first meeting in the wake of the Sept. 16 fatal shooting of Iraqis, allegedly by Blackwater USA security contractors guarding a U.S. diplomatic convoy.

In New York, Mr. Bush noted that al-Maliki and others in his administration are "dedicated to getting good law out" of the parliament. "We're with you, prime minister," he said. Al-Maliki, meanwhile, said their talks focused on "mutual goals" of defeating terrorism and building a stronger Iraq.

The image of an equitable, if tenuous, political symbiosis masked the kind of frustrations that surface only behind closed doors. Al-Maliki referenced the shooting of the Iraqis by pointedly stating in private that the sovereignty of Iraq must be respected, according to another Iraqi official present at the meeting, who also spoke on condition of anonymity.

President Bush, in turn, reminded al-Maliki that the next U.S. president may not be as understanding of, or sympathetic to, the Iraqi's domestic struggles, the first official said.

Currently, those struggles include defections from the government, the stalling of implementing much-needed legal and constitutional reforms as a political power play, as well as corruption, militias and terrorism.

"The task before us is great," al-Maliki conceded, speaking before reporters. "The Iraqi side is fully prepared to assume all the responsibilities and work for a better future for all of Iraq."

The comments by Mr. Bush and al-Maliki in New York project a confidence that many of their U.S. Congressional critics -- Democrats and some Republicans -- have said only serves to misdirect from the reality on the ground in the war-torn country.

With the 2008 U.S. presidential elections upcoming, both parties have latched on to the Iraq debate as a bell-weather of their foreign policy credentials.