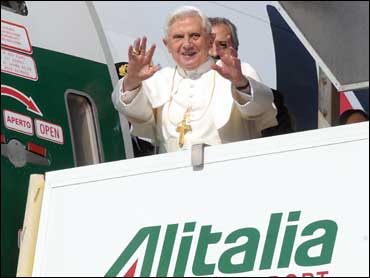 Pope Benedict XVI said Tuesday that the distribution of condoms is not the answer in the fight against AIDS in Africa.

Benedict has never before spoken explicitly on condom use although he has stressed that the Roman Catholic Church is in the forefront of the battle against AIDS. The Vatican encourages sexual abstinence to fight the spread of the disease.

"You can't resolve it with the distribution of condoms," the pope told reporters aboard the Alitalia plane headed to Yaounde, Cameroon. "On the contrary, it increases the problem."

Some priests and nuns working with victims of the AIDS pandemic ravaging Africa question the church's opposition to condoms.

The pope also said that he intends to make an appeal for "international solidarity" for Africa in the face of the global economic downturn.

He said that while the church does not propose specific economic solutions, it can give "spiritual and moral" suggestions.

Describing the current crisis as the consequence of "a deficit of ethics in economic structures," the pope said, "It is here that the church can make a contribution."

Benedict's seven-day pilgrimage will take him to Cameroon and Angola.

Africa is the fastest-growing region for the Roman Catholic Church.

Benedict has another potentially controversial trip planned this spring. As CBS Radio News correspondent Robert Berger reports in World Watch, the pope is to visit Israel and the Palestinian territories at the beginning of May - and relations between the Vatican and the Jewish state are strained.