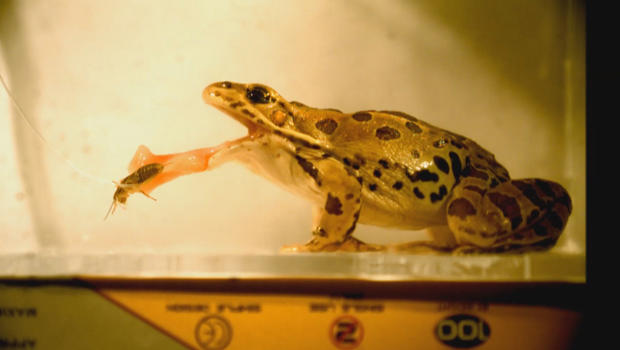 Nature is full of technologies, if you think of technologies as just tools for living. Take the frog tongue: to catch a glimpse of a frog's tongue in action, you have to be pretty sharp, or determined – both of which might describe Alexis Noel, a doctoral student at Georgia Tech University.

"So, you can imagine these extreme accelerations that are happening to the insect as it's being yanked back into the mouth. And yet, this adhesive on the tongue is still able to maintain the grip."

Noel's research into that sticky stuff, frog saliva, began when she stumbled across a video that had gone viral: "I actually ran across this really funny video of this bullfrog trying to eat insects off of an iPhone screen. Of course, they're fake insects, and they're scrolling down the screen. And we thought it was hilarious."

"So, we started asking these questions, like, how is this frog tongue so fast and so sticky, and how does it catch these insects in the blink of an eye? Being a mechanical engineer and dabbling in fluid mechanics, I thought, 'Oh, this is a really interesting adhesive question.'"

Noel hopes that understanding the mechanics of frog saliva could lead to the development of futuristic adhesives. And if that seems far-fetched, then welcome to the world of biomimicry, where scientists look to nature for innovations.

The shape of Japan's famous bullet train, for instance, was inspired by the shape of a kingfisher's beak. There are windmill blades modeled after the fins of of a humpback whale.

But the most ubiquitous biologically-inspired innovation of all might be in your closet. In 1941, Swiss engineer George de Mestral went for a hike in the Alps and noticed the way burrs adhered to his clothing. Today, the hook-and-loop fastening system most of us call velcro is used in thousands of products.

If there is one person to thank for the popularity of biomimicry, it would be Janine Benyus: "It's actually a new way of inventing. And so, chemists and designers and architects and engineers, when they have a problem, they ask, 'What in nature has already solved this problem?' The core idea is that life's been in Earth 3.8 billion years and that's a lot of R&D."

Benyus popularized the term some two decades ago in her book, "Biomimicry: Innovation Inspired by Nature." And if you spend some time with her at her home in Montana, you will get the sense nature has taught her to see the world a little differently.

"When I look at a tree, I think now that it's a pretty amazing chemistry operation going on, silently," she said.

But while the scientific field might be new, there's nothing new about being inspired by nature.

Correspondent Faith Salie said, "But what you're saying is, the newest ideas are the oldest ideas, and they've been there all along?"

By one estimate, biologically-inspired innovations could contribute $425 billion to the country's gross domestic product by 2030.

It was porcupine quills that pointed scientist Jeff Karp towards a new design for a medical staple.

So, how did that idea come about?  "You put porcupine quills in your face?" asked Salie.

"Yeah, we like to do, from time to time, some self experimentation, and really get a sense what it is that we're working with," Karp laughed.

"It was known at the time that quills have these backwards-facing barbs. When you try to remove the quill, the barb catches on the tissue fibers, and then kind of just splays out to the side so it can grab even more. And that's where it gets this incredible gripping force."

At his lab in Boston's Brigham and Women's Hospital, Karp is creating new medical devices using some old technology – very old technology. Slug slime was a starting point for a medical glue that works in wet environments. The way jellyfish tentacles fan out to ensnare plankton inspired a filter to capture cancer cells in blood.

"There's literally hundreds of millions of years of research and development that's happening all around us," Karp said. "And if a creature or a plant is not able to come up with a solution, then it becomes extinct. And so in essence, we're surrounded by solutions, which I see as ideas for solving problems."

Benyus asked, "Can our technologies be as elegant and as graceful as those in the natural world? And if we hold ourselves to that standard, if we literally take the natural world as our standard, it really ups our game! It's something to aspire to, but it already exists."