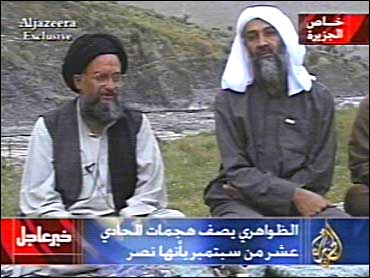 Bin Laden biographer Yosseff Bodansky, interviewed on the CBS News Early Show Tuesday, also warned the recent rash of communications from al Qaeda could be an indication the terror group is "building toward something.

The montage of Sept. 11 images, bin Laden footage and threats against the United States from a man identified as one of the suicide hijackers was aired Monday as the latest message from the al Qaeda terrorist network.

Defense Secretary Donald H. Rumsfeld has said al Qaeda is on the run, but someone allied with bin Laden clearly still has the ability to produce a slick piece of propaganda.

It wasn't clear when the tape, excerpts of which were broadcast on the Arab satellite station Al-Jazeera, was made. The appearance of an apparent hijacker in one segment indicates that at least some parts of the video were filmed before the attacks on the World Trade Center and the Pentagon.

To Arab eyes, there may be another message on the tape - the hijacker's Palestinian headdress – a symbol linking al Qaeda with the Palestinian cause in their battle against Israelis.

"It seems like they would like to capitalize on the hate campaign which is now spreading in the Arab worlds and Muslim worlds," said Abdel Bari Antwan, Editor of the Arabic newspaper Al-Quds.

Al-Jazeera's editor in chief, Ibrahim Hilal, said the hourlong video, complete with narration and graphics, was delivered by hand to the station's Qatar offices a week ago.

"I can't tell you about when the material was made exactly, but it seems very recent," Hilal said, noting the narrator at one point refers to the March 27-28 Arab League summit as coming up shortly.

Al-Jazeera, which has aired previous bin Laden statements, said it would broadcast the entire tape Thursday during a monthly documentary program called "Under the Microscope."

Also Monday, the pan-Arab newspaper Al Hayat published excerpts from what it said was a statement from Mullah Mohammed Omar, leader of the Taliban militia that ran Afghanistan and gave haven to al Qaeda before being ousted in a U.S. bombing campaign last year.

Omar expressed solidarity with the Palestinians in their confrontation with Israel and linked their plight to the U.S.-led war on terror, which some militant Muslims describe as a war on Islam.

"The war against Islam and Muslims has become an apparent Jewish crusade," said the statement attributed to Omar. "The Jews and Americans are side by side in their war against us."

Al Hayat reporter Mohamed Salah, known for his reporting on Islamic militant movements, said that he received the statement as an email on Sunday. He refused to say who sent it or elaborate on why he believed the statement was an authentic message from Mullah Omar.

The whereabouts of Omar and bin Laden, his top deputy Ayman al-Zawahri and other top al Qaeda officials are unknown.

On Monday, Al-Jazeera previewed several segments of the video, including one in which bin Laden and al-Zawahri kneel side-by-side. Only al-Zawahri is shown speaking; he calls the terrorist attacks on America a "great victory."

Al-Jazeera also aired a segment of a man, identified on the video as a Sept. 11 hijacker, speaking to the camera in a style similar to videotapes made by Palestinian suicide bombers before attacks.

Hilal said the man in the video was Ahmed Ibrahim A. Alhaznawi. U.S. officials say Alhaznawi was one of four attackers on United Airlines Flight 93, which crashed in rural Pennsylvania.

"The time of humiliation and subjugation is over. It's time we kill the Americans in their heartland," the man identified as Alhaznawi said.

He bragged of killing Americans outside their homeland, an apparent reference to earlier attacks on U.S. targets overseas blamed on bin Laden's network.

He wore military fatigues over a black shirt and a black-and-white checked Arab headdress wrapped around his head. He sat before an image of towers surrounded in flames that could have been added to the background after the personal recording was made.

According to the excerpts shown Monday, the tape included pictures of one of New York's World Trade Center Towers collapsing in a cloud of dust and rubble.

Al-Jazeera said the tape was titled "The wills of the New York and Washington Battle Martyrs." The title shot included photos of the 19 hijackers. Al-Jazeera editor Hilal said the tape might have been delivered from inside Afghanistan.

The station said during a rerun of the segments that information on the tape indicates that the hijacker wrote and recorded his "will" in Kandahar, Afghanistan six months before the Sept. 11 attacks. It did not elaborate.

"God, I consider myself yours, and accept me as a martyr," the alleged hijacker repeated three times before ending his message.

In Washington, a U.S. official, speaking on condition of anonymity, said the man is believed to be Alhanzawi. U.S. officials have been unable to glean any additional information from the Al-Jazeera broadcast, and said they were waiting for the full tape to be aired.

The U.S. government has at least one other unaired videotape of bin Laden, found by pro-U.S. Afghan soldiers in Kulangar, Logar province. The Wall Street Journal reported Monday the tape shows bin Laden and a few others camping at night, suggesting bin Laden had forgone his large entourage in favor of a small group of supporters after Sept. 11. It was unclear when the tape was found.