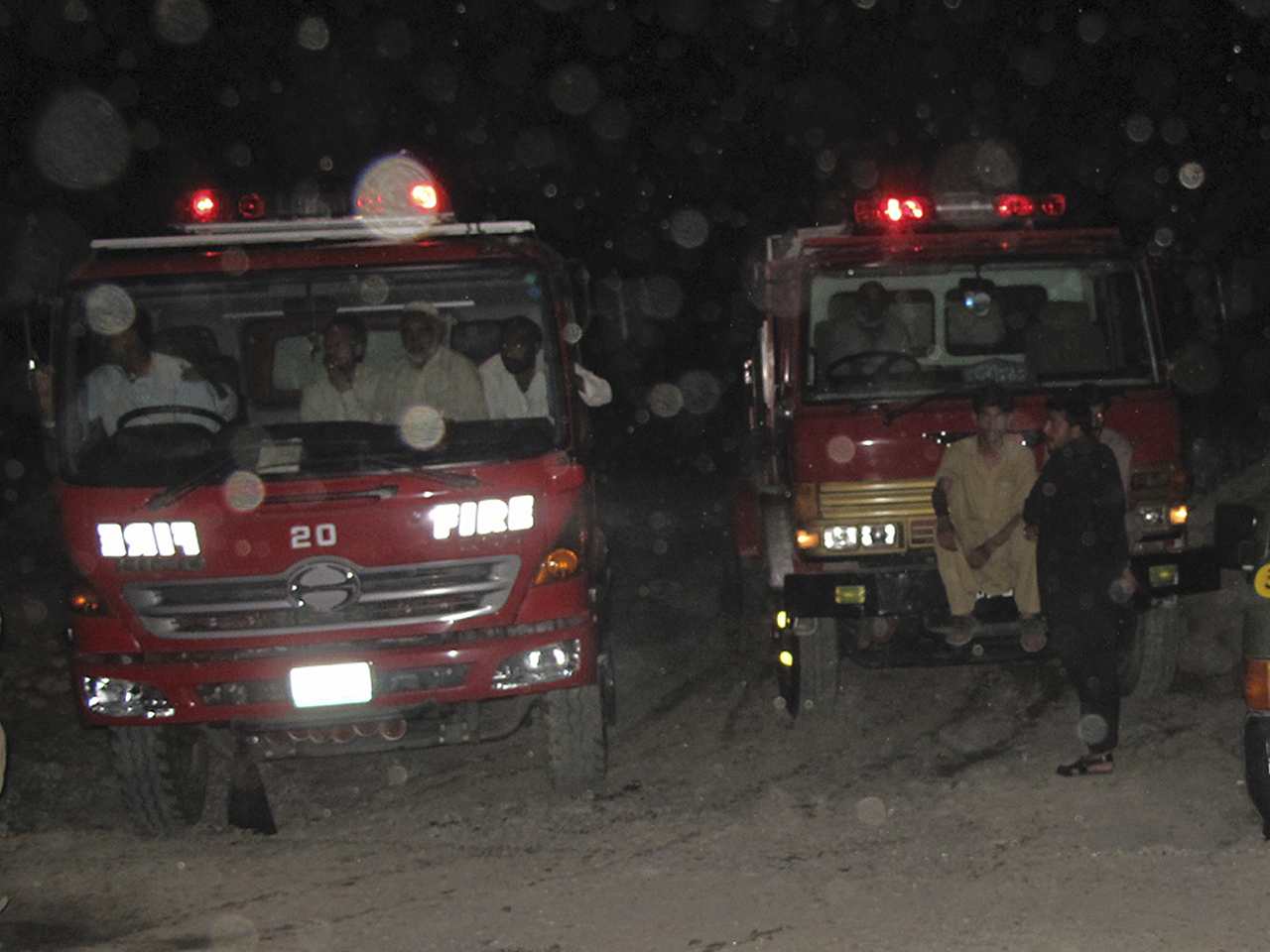 ISLAMABAD - Osama bin Laden was holed up in a sprawling house just 100 yards from a Pakistani military academy when helicopters carrying U.S. anti-terror forces swooped in the early morning hours of Monday and killed him.

Flames rose Monday from the building that was the apparent target of the raid as it was confirmed that the world's most wanted fugitive died not in a cave, but in a town best known as a garrison for the Pakistani military. A U.S. official tells CBS News that one of bin Laden's sons was also killed in the raid along with at least two others, but the official did not name the son or the others killed.

The operation "doesn't bode well for our friends" the Pakistanis, one U.S. official tells CBS News national security correspondent David Martin. The official, who spoke on condition they not be named, said it would be hard for the Pakistani government to explain how such a high-profile figure could have been living in such a high-profile residence "without their knowing".

U.S. officials tell CBS that cooperation from the Pakistanis "assisted in this lead as we pursued it," but the U.S. shared no specific intelligence on the compound prior to the raid.

"We are very concerned that he was inside of Pakistan but this is something that we will work with Pakistan government about," one official tells CBS.

CBS News senior foreign affairs correspondent Lara Logan says Pakistan's government, from the U.S. standpoint, "is looking extremely vulnerable" right now; They have to explain how bin Laden managed to live, for an undetermined period of time, almost in the shadow of one of the nation's primary military training academies.

Logan reports that Pakistani army chief, Gen. Ashfaq Parvez Kayani, was at the academy just four days before the strike, telling graduating cadets their force had "broken the backbone" of militants in the country.

Pakistan has insisted in the past that bin Laden wasn't hiding in the country, a claim Logan says has been revealed as "the grand deception of Pakistan".

Pakistan's foreign office hailed the death as a breakthrough in the international campaign against militancy, and noted al Qaeda "had declared war on Pakistan" and killed thousands of Pakistani civilians and security officers.

It stressed that the operation to kill bin Laden was an American one, and did not mention any concerns that Pakistani officials may have been protecting bin Laden in some way. Domestically, the government may yet face criticism by political opponents and Islamists for allowing U.S. forces to kill bin Laden on its soil.

CBS News foreign affairs analyst Pamela Falk, based at the United Nations, says the diplomatic cooperation with Pakistan will help the Obama administration in future efforts to shut down terror financing in other countries where al Qaeda operates.

"There is a great sense of both justice and closure in the U.S. and in the diplomatic community," Falk says, "but this needs to be the beginning and not the end of counterterror cooperation."

Pakistani officials and a witness said bin Laden's guards opened fire from the roof of the building, and one of the choppers crashed. The sound of at least two explosions rocked the small northwestern town of Abbottabad where the al Qaeda chief made his last stand. The U.S. said no Americans were harmed in the raid.

Abbottabad is home to at least one regiment of the Pakistani army, is dotted with military buildings and home to thousands of army personnel. Surrounded by hills and with mountains in the distance, it is less than half a days drive from the border region with Afghanistan, where most intelligence assessments believed bin Laden was holed up.

The news he was killed in an army town in Pakistan will raise more pointed questions of how he managed to evade capture and whether Pakistan's military and intelligence leadership knew of his whereabouts and sheltered him. Critics have long accused elements of Pakistan's security establishment of protecting bin Laden, though Islamabad has always denied this.

"I heard a thundering sound, followed by heavy firing. Then firing suddenly stopped. Then more thundering, then a big blast," he said. "In the morning when we went out to see what happened, some helicopter wreckage was lying in an open field."

He said the house was 100 yards away from the gate of the academy.

A Pakistani official in the town said fighters on the roof opened fire on the choppers as they came close to the building with rocket propelled grenades. Another official said four helicopters took off from the Ghazi air base in northwest Pakistan.

Last summer, the U.S. army was based in Ghazi to help out in the aftermath of the floods.

Women and children were taken into custody during the raid, he said.

Both officials spoke on condition of anonymity because of the sensitivity of the information.