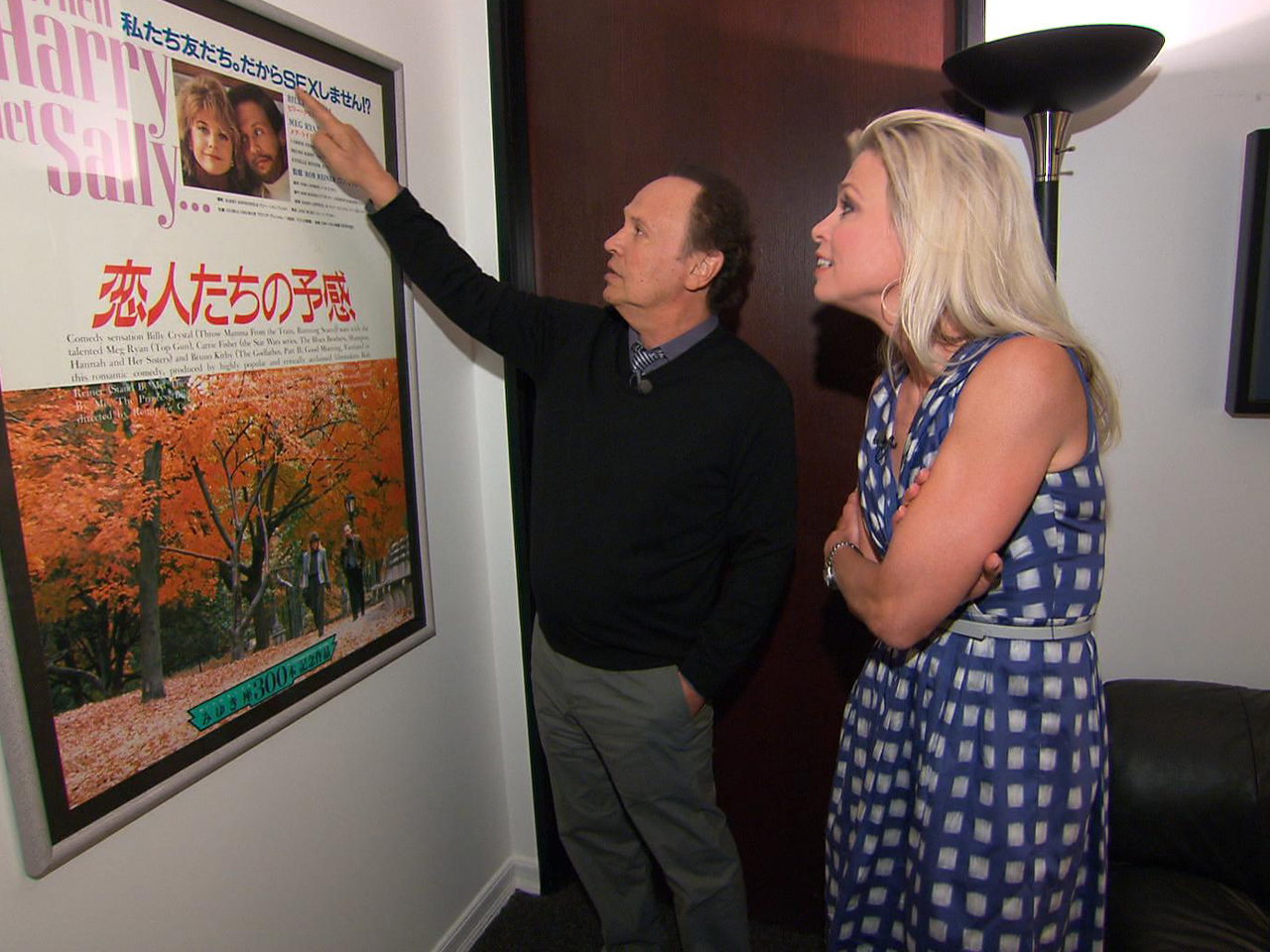 (CBS News) Billy Crystal has reached an age that many of us associate with retirement. But he's approaching it just the way you might expect -- as he told our Tracy Smith:

"I never worry that I'll die in my sleep," Billy Crystal told an audience at NYU, "because I'm never asleep!"

When asked by Smith what keeps him up at night, he responded, "Everything."

"I'm a baby. I sleep like a baby -- I'm up every two hours. And I think a lot. I worry a lot. I have great nights of no sleep where ideas come."

"So, is the insomnia a recent thing?" asked Smith.

Truffles: Secrets of a fragrant delicacy

At 65, Billy Crystal doesn't seem to have time for sleep: he's one of the biggest entertainers of a generation -- actor, director, and author of a new book about being 65.

"When you're 65, you're surprised by what turns you on. You look at Dame Edna and think, Hmmm..."

His routine, at New York University last June, was actually a recording session for the audio version of "Still Foolin' 'Em," Crystal's take on getting old (and not always gracefully):

"During the past year I saw my dermatologist more than my grandkids. Things started to grow on me where they shouldn't. My ass looks like the bottom of a boat. I don't shower anymore; I'm sandblasted twice a week."

"Sunday was our day to go to the boardwalk or even a Broadway show. And at night we'd go out for Italian or Chinese, because on Sunday, Jews aren't allowed to eat their own food. It's in the Bible!"

For Crystal, nostalgia on stage is fine, but you'll never catch him watching reruns of himself.

"You know, I've never looked at -- with the exception of little snippets -- very much of anything I've done in the last 15, 20 years," he said, noting that he's never watched his performances of the live Oscar broadcasts.

"I know me. I'll take my little shrimp fork and start pokin' at it, you know? So I'm very happy that if it feels good, then leave it alone."

Crystal has hosted nine Oscar ceremonies masterfully, if not always easily. In 1992, he was all smiles -- and so sick he could barely stand.

"I had 103 degree temperature that year," he told Smith. "Coughing, sore throat, couldn't hear. I was really almost deaf, 'cause there was [an] ear infection."

It was a great night, anyway, musical number and all.

"Then they took me into the producer's office and gave me an IV of fluid so I could finish the show," he said.

Crystal didn't take home an Oscar himself that night -- he has yet to be nominated for one -- but he does own a share of screen immortality, in such hits as "The Princess Bride," "City Slickers" and "When Harry Met Sally..."

Crystal showed fans a different side in 1992's "Mr. Saturday Night," as an aging, self-destructive comedian. It was a side that few people, apparently, wanted to see; the film was considered a box office failure.

Yeah, said Crystal: "It wasn't a hit! We ended up doing okay. But it was not good, no."

"To you, was that a hiccup? Or at the time, did you think 'career killer'?" asked Smith.

"A career killer," he replied. "Oh, totally panic. I'd just come off two huge movies, you know, 'Harry and Sally' and 'City Slickers' back to back, and three Grammy Awards I had hosted had all gone great. The Oscars, first year, I guess. And now this."

It wasn't his first taste of disappointment: in 1975, he was scheduled to appear on what was then the brand-new "Saturday Night Live," only to have his sketch cut at the last moment.

"I don't blame anybody. It just was, these things happen," Crystal said. "Unfortunately, it was where I felt I should be."

"Did it kill you?" asked Smith.

Of course, he finally got his chance a few years later.

He credits his wife with helping him through it all. Billy Crystal met the former Janice Goldfinger in college, at a time when he was still reeling from his father's sudden death a few years earlier.

They were married in 1970: 43 years later, they're proud and active grandparents.

At his home in the L.A. hills, he's in training, getting ready for another physically grueling run of "700 Sundays" on Broadway later this fall.

He trains six days a week, and it shows: Billy Crystal is a senior citizen trapped in an adolescent's body.

It was tough to write, he says, and nearly impossible for him to read out loud.

"As I sit here writing and look across the room at Janice, I keep thinking of the most heartbreaking question: which of us will go first? I can't bear to think of life without Janice. I want to go first, because I don't want to miss her, because that would be a pain far worse than any death."

Crystal told Smith that when he got to that chapter, "I'm reading off an iPad, I couldn't talk. I just stopped, 'cause I made the mistake of looking at her and I knew she was, you know . . .

"And then it got crazy . . . I was tapping the thing, and then somehow it fell, the iPad. And then when it came back up, all the text was gone and it was that, awful technological Jewish moment, 'How does this work? I can't make this work!' "

This, he said during the reading, "is why I miss paper!"

Crystal told Smith, "I don't know what else to say to you, 'cause I'm still moved by it, you know?"

"It was quite a moment," Smith said.

Maybe this time, he actually should.

"I'm going to go on just living and laughing and loving. I'd like to think there is a heaven and it starts from the happiest day of your life. I'll be 18 and Janice Goldfinger will walk by me in a bikini, and I will follow her and it will start all over again. I'd really like to think that."

And that may be the true essence of Billy Crystal: a man who writes about death while embracing the beauty of life . . . a lifelong juggling act that is far from over.