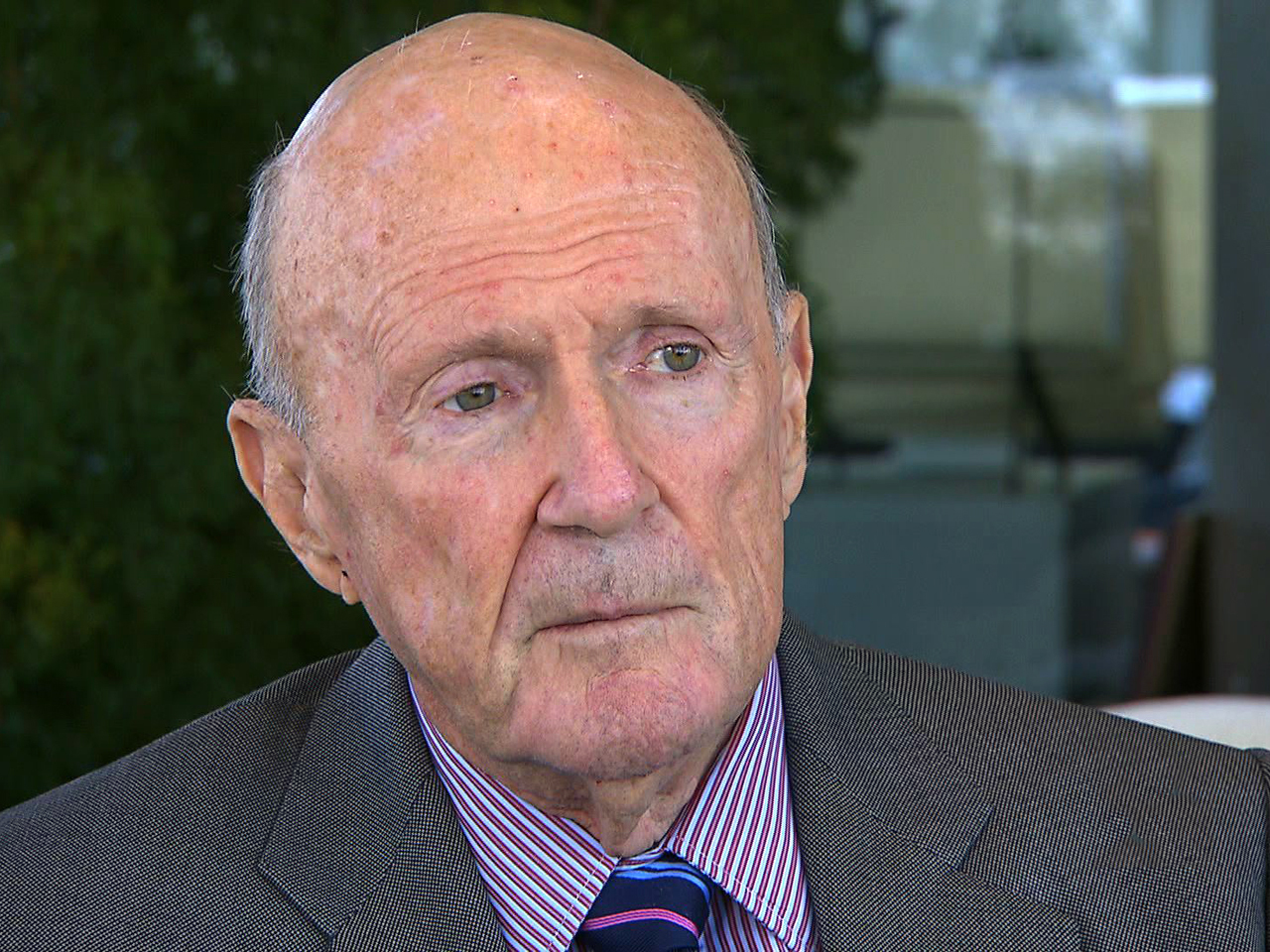 NEW YORK (CBS) -- Ask legendary investor Julian Robertson what he wants in exchange for his $1.25 million contribution to the main super PAC supporting Mitt Romney, and the answer you get is simple: "I want a great president of the United States. That's what I want," Robertson told CBS News in an exclusive interview in his midtown Manhattan office. "Nothing more specific than that." (Watch Evening News version of the story in video player.)

Robertson, 79, a pioneer of the hedge fund industry whose personal wealth is an estimated $2.5 billion, was the first $1 million donor to the super PAC Restore Our Future. Eleven more individuals or companies followed, helping the pro-Romney group to raise $43 million through February.

"I want a better nation here. I want my grandchildren to have a better place in which to live," Robertson said. "In my opinion, this is one of the most important investments I've ever made."

Capping a career on Wall Street, Robertson founded Tiger Management in 1980 with $8 million and grew the firm's assets into $20 billion. Annual returns exceeding 20 percent were typical for two decades.

Robertson has given Restore Our Future $1.25 million - $1 million last November 22 and another $250,000 on January 18, according to disclosure reports filed with the Federal Election Commission.

He is one of 16 billionaires to donate to the pro-Romney group and one of 172 Restore our Future benefactors who also donated the maximum allowed during the primaries - $2,500 - to the Romney campaign itself, according to a joint study by three campaign watchdog groups.

"I have never met a man that I think is more equipped to be president than Mitt Romney," Robertson said of the former Bain Capital CEO, director of the Olympics, and one-term governor of Massachusetts.

"He knows how to cross those party lines and get things done," he continued. "Rick Santorum - I mean, what kind of experience does he have?"

Robertson asserted that Romney's ties to the financial community is not a factor in his support. Half of the pro-Romney super PAC's revenue to date has come from the industry, according to an analysis by the Center For Public Integrity.

Robertson said he sees Romney as the best candidate to handle the nation's economic challenges.

"We've really gotten ourselves in a pickle," Robertson says of this year's projected $1.3 trillion federal budget deficit. "We're just loading up our children and grandchildren with debt."

Robertson says that his donations are not tied at all to Romney's campaign promise to repeal the Dodd-Frank financial industry law signed by President Obama two years ago, and he doesn't care if income taxes go up a little to reduce the $16 trillion national debt. "As long as they [taxes] went up in relation to GDP [gross domestic product]," he said.

Restore Our Future's signature role in the campaign has been the negative attack ad on Romney rivals. Of $40.5 million it has spent through this week, the super PAC spent $39.3 million against other candidates: $20.6 million against Rick Santorum and $18.7 million against Newt Gingrich, according to tabulations by the Sunlight Foundation and the Center For Responsive Politics.

"I certainly contributed to the ads. I knew that. Any way Mitt Romney can get his message out, I think, is great," Robertson told us.

He recalled proudly how the avalanche of ads slowed down Gingrich's momentum after the former House Speaker's victory in South Carolina. Romney came from behind to win the pivotal primary in Florida, where the super PAC spent $9 million.

Robertson said, "I thought, 'Excellent.' And I'm a part of that. And he won."

Though he thinks a President Romney might take his phone call, Robertson said his super PAC donations - and there may be more of them - have no strings attached.

"The last thing I want him to think -- and I know he doesn't think that -- is that he is beholden to me," he said. "I don't think that he will do the X or Y or would do X or Y because I called and pushed it."

Robertson is a renowned philanthropist - establishing a foundation which doles out grants to non-profits; giving millions to renovate Lincoln Center and to further cancer research in New York; endowing scholarships at two leading colleges in his native North Carolina, UNC and Duke; boosting museum collections with paintings by Cezanne, Picasso, Braque, Matisse, Leger, and Bonnard; taking the Warren Buffet/Bill Gates-inspired Giving Pledge to donate half his fortune.

But Robertson sees a boost to Romney's potential path to the White House as the most crucial gift.

"As a giver, I can't imagine anything more important, as an American, than a good president of the United States. I mean, I just think that's the most important thing," Robertson said. "The leverage he has to do good is just enormous."

To watch an extended interview with Tiger Management CEO Julian Robertson click on the video player below.