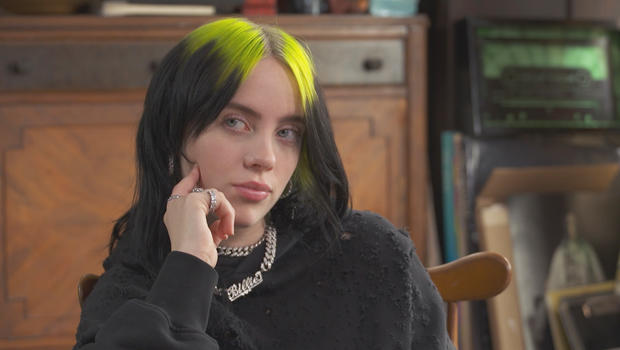 Ten years ago, Billie Eilish was a little girl singing in her bedroom. Today, at the ripe old age of 17, she's still performing songs she made up.

But there's a difference.

This year Eilish released her first album, "When We All Fall Asleep, Where Do We Go?," making one of the biggest debuts in music history. Her #1 song, "Bad Guy," has been streamed more than 3 billion times.

She's the youngest artist ever nominated for all four major Grammy Awards (Album of the Year;  Record of the Year and Song of the Year, for "Bad Guy"; and Best New Artist).

"Never in a million years would've thought I would be anywhere near where I am now, at all," Eilish replied.

But it's not a one-woman show. The guy playing guitar with her is her older brother, Finneas O'Connell. And the music all comes out of a small bedroom in the house where Billie and Finneas grew up in Los Angeles.

It's where they recorded their first hit, "Ocean Eyes," written by Finneas four years ago. The song was streamed a billion times. Finneas was 18, and Billie was just 13.

"Oh, my God, I sound like a little baby," she laughed, listening to the recording.

Their parents, Maggie Baird and Patrick O'Connell, said they realized their children had something when Finneas became obsessed with music. They home-schooled them, encouraging their creativity. [Billie's full name, by the way, is Billie Eilish Pirate Baird O'Connell.]

"Billie never ever stopped singing. I mean, it was insane," said Baird.

"From the start," O'Connell said.

"She sang practically before she talked," Baird said. "She sang everything, everywhere she went, to the point where you'd have to be, like, 'You can't sing here!'"

King asked Finneas, "When did you think, 'God, my sister's really good'?"

"Well, she was always better than me, and that was frustrating," he laughed.

To which Billie said, "Growing up, I actually thought I was a terrible songwriter just because he was so good that I was like, 'Oh, I must be terrible if he's that good.' Like, I must be.

"And then he would literally tell me that I was so good at singing, that he thought that he was bad at singing. So, we both had these, like, opposite strengths, we felt like."

For all her new fame and fortune, Billie still lives in the house in which she grew up. (Finneas moved out recently.) Their parents sleep in the living room – that way Billie has a bedroom, and the Finneas bedroom/studio is always available.

On the wall of that room is the songlist, written on a dry-erase board, of what became "When We All Fall Asleep, Where Do We Go?," which they wrote and recorded last year in that bedroom.

"There isn't even any sound-proofing in here!" Eilish said.

Some critics have found her music, as The New York Times put it, "sullen, depressive, death-haunted," among other adjectives.

"At the beginning there was all these labels, and radio people that wouldn't play me because I was too sad and no one was gonna relate to it," Eilish said. "And that was just funny to me, 'cause I was like, everybody has felt sad in their lives. And of course it's really important to promote happiness and loving yourself and stuff, but a lot of people don't love themselves."

King asked, "You don't see yourself as a dark person, do you?"

"No! Not at all. Nobody that knows me thinks I'm a dark person. My God. I'm, like, always laughing at everything."

But fame has brought darkness into her life. She's been very open about her struggles with anxiety and depression. Becoming an instant worldwide celebrity didn't help.

"Why? Why were you unhappy?" King asked.

"I don't know. I mean, there were so many reasons. It all was because I was actually clinically depressed. That was the beginning of it. But then on top of it was this fame that I didn't want at the time. It was this inability to go out places. And it was so torturous, 'cause all I wanted to do was go hang out with my friends."

Her mother, Maggie, said, "The depression was the hardest part of all this. We checked in with her all the time about, 'Do you still want to do this? Do you want to do this?' She loved doing the shows. That's what kept her going."

Eilish said, "I've been kind of coming out of it for the last, like, six months actually, which feels like that [snaps fingers] to me. But it's, like, the most freeing feeling to be able to come out of that shell."

She says she got through it with therapy, family support. and patience.  And she threw herself back into her music.

Back in the studio, Billie and Finneas showed King the birth of a song: "So, a lot of songs, like, start like this, where we're just messing around. He's playing whatever," Eilish said.

The two improvised on the piano and into a microphone. "And you just say words?" King asked.

"Yeah. We just kinda mumble. Like, 'La-na-na-na when no one cares at all. My shoes are off, my hair comes down.' Like, you just make up nothing.

"I literally said, 'My shoes are off, my hair comes down!'" she laughed

At the age of 17 going on 18, Billie Eilish has come a long way without ever really leaving home. Next month, brother and sister are going to the Grammys. Billie has six nominations and Finneas has five. As any teenager might say: "Whatever."

"You look super-stressed and worried, laying there," King noted.

You can stream Billie Eilish's album "When We All Fall Asleep, Where Do We Go?" by clicking on the embed below (Free Spotify registration required to hear the tracks in full):

Live music is back on stage 2022
More