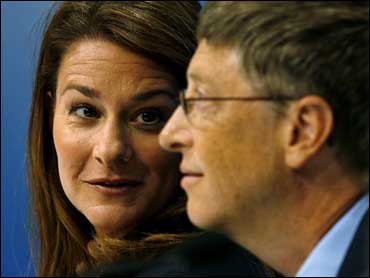 All the money in the world will not be able to defeat HIV/AIDS unless great strides are made in preventing new infections — and that can only be achieved by giving women and other high-risk groups the ability to protect themselves, Bill and Melinda Gates told the opening of the International AIDS Conference on Sunday.

Bill Gates said that despite growing access to antiretroviral drugs in countries hard-hit by HIV/AIDS, between four and five million people worldwide will become infected in the next year.

"We have to do a much better job of prevention," said Gates, whose foundation just donated $500 million US to the Global Fund to Fight AIDS, Tuberculosis and Malaria.

"We'll never be able to deal with the numbers of people that would have to go on treatment if we don't make a dramatic breakthrough in prevention."

International AIDS conferences are renown for mixing science and politics and Toronto's opening ceremonies were no exception. Conference co-chair Dr. Mark Wainberg drew sustained cheers when he slammed Prime Minister Stephen Harper for slighting the conference, which has drawn 24,000 delegates from around the globe.

"Mr. Harper, you have made a mistake that puts you on the wrong side of history," said Wainberg, director of McGill University's AIDS Centre. "The role of the prime minister includes the responsibility to show leadership on the world stage. Your absence sends a message that you do not regard HIV/AIDS as a critical priority.

"Clearly, all of us here tonight disagree with you."

In Harper's stead, Health Minister Tony Clement told the huge crowd at the Rogers Centre that HIV/AIDS requires "all of us to respond in an unprecedented and historic way."

"That is why we are here this week," Clement said to catcalls of "Where's Stephen Harper?" and protesters holding up signs. One read: "Sleep in, Steve? AIDS never sleeps."

The Microsoft founder said he will call on the world to accelerate research into microbicides — drugs that can block the virus from entering and infecting a person — and oral drugs that would prevent acquisition of HIV. "We hope and expect that this could be the next breakthrough."

Such measures are particularly important because they would benefit women who now have to rely on men to agree to abstinence or condom use "And that simply isn't getting the job done. A woman should never need her partner's permission to save her own life," Gates said.

"So there's progress on these but the pace has been too slow."

His wife, Melinda, stressed the need to use and make more widely available the tools known to stop the spread of the virus.

"Today fewer than one in five people who are at high risk for HIV have access to things like condoms, clean needles, education and testing," she said. "That's something that simply needs to change.

"One of the things that we fundamentally believe about HIV the more that we've been involved in this is you have to put the power in the hands of women. That is going to be the way to change this epidemic."

Gov. Gen. Michaelle Jean — a native of Haiti — recalled the stigma around HIV/AIDS to which people of her homeland were subjected, saying it is time to change attitudes about the disease in all corners of the world.

"AIDS knows no boundaries, nor has it any regard for our prejudices or the ways in which we ostracize and abandon one another," Jean said. "Is that not reason enough to put those prejudices to rest and come together to fight this universal threat?

"We must be relentless in our fight against discrimination, which breeds fear and ignorance. We must ensure that people living with this disease are not treated like pariahs."

Frika Chia Iskandar, an HIV-positive woman from Jakarta, said "stigma and discrimination are still happening, noting that a dentist refused to treat her last year. "It's still there. Nothing much has changed."

The conference has brought an estimated 24,000 delegates and 3,000 journalists from around the world to Toronto for the biggest gathering in the now-biennial meeting's 21-year history.

The two-hour opening was to be followed by a concert featuring Alicia Keys, Barenaked Ladies, the Blue Man Group, Our Lady Peace, Amanda Marshall and Chantal Kreviazuk.

Conference workshops and plenary sessions officially begin Monday, and will deal with a wide range of issues — from scientific research to caring for those with HIV/AIDS to preventing the spread of the virus, which has killed 25 million people in the last 25 years and infected about 40 million worldwide.