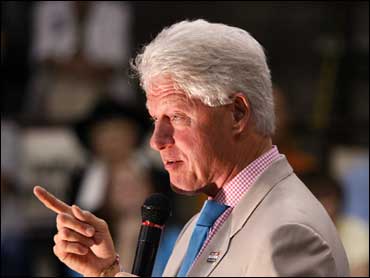 Add to former President Clinton's regrets this campaign season a stream of invective while commenting Monday on an unflattering article in Vanity Fair magazine.

"President Clinton was understandably upset about an outrageously unfair article," Jay Carson, a spokesman for Hillary Rodham Clinton's presidential campaign, said after her husband's remarks appeared on the online Huffington Post, "but the language today was inappropriate and he wishes he had not used it."

Huffington Post writer Mayhill Fowler reports that she approached the former president while he campaigned for his wife Monday in Milbank, S.D., and asked for his reaction to the article "The Comeback Id" by national editor Todd S. Purdum in the July issue of Vanity Fair.

Purdum mulls the state of Clinton's mind given the wealth he has amassed in recent years, the negative impact he has had at times on his wife's campaign, his negative comments about her rival, Barack Obama, the company he keeps with jet-setting millionaires, and his health after heart surgery in 2004. In analyzing Clinton in more than 9,500 words, which include those of anonymous sources, Purdum asks, "What's the matter with him?"

Clinton had no doubt about what's the matter with Purdum, whom he called "sleazy" in the Huffington Post interview.

"He's a really dishonest reporter," Clinton said during the tirade that followed, according to Fowler's report. "And I haven't read (the article). There's just five or six blatant lies in there. But he's a real slimy guy."

Clinton went on to observe: "It's all politics. It's all about the bias of the media for Obama. Don't think anything about it. But I'm telling ya, all it's doing is driving her supporters further and further away - because they know exactly what it is - this has been the most rigged coverage in modern history - and the guy ought to be ashamed of himself. But he has no shame. It isn't the first dishonest piece he's written about me or her."

A call to the New York office of Vanity Fair for comment Monday night was not immediately returned.