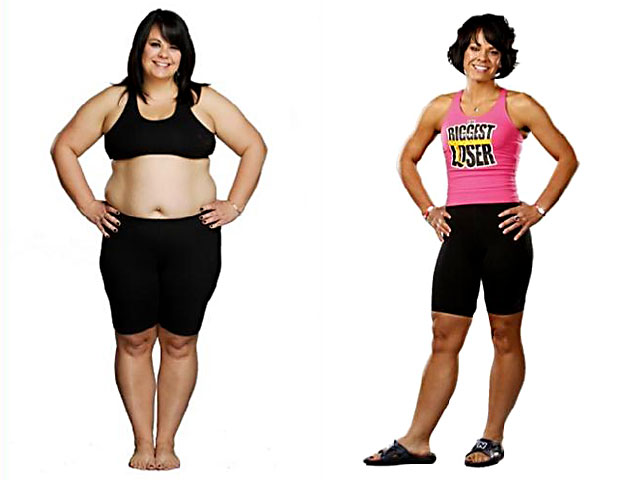 The popular reality television show "The Biggest Loser" is the focus of a new study showing how hard it is for people to keep pounds off in the months and years following a successful weight loss program.

The research, published in the journal Obesity, involved 14 former contestants from the NBC series in which they competed to see who could drop the most weight over seven months of intense dieting and exercise. They lost an average of over 100 pounds during the course of the show, and some dropped far more.

But for almost all of them, keeping the weight off turned out to be a losing battle.

It's well known among obesity experts that when people lose weight, their resting metabolic rate slows, meaning they burn fewer calories while at rest. Their rate is often slower than it would be compared to other people of the same size who hadn't lost a lot of weight.

"The phenomenon is called 'metabolic adaptation' or 'adaptive thermogenesis,' and it acts to counter weight loss and is thought to contribute to weight regain," wrote the authors, researchers from the National Institute of Diabetes and Digestive and Kidney Diseases, part of the National Institutes of Health (NIH), in Bethesda, Maryland.

To learn more, using blood, urine and other tests, they calculated the resting metabolic rate and body composition changes in Season 8 contestants six years after the end of the weight loss competition.

The study found that only one of the 14 contestants succeeded in maintaining their slimmer weight. The rest regained a significant amount of the weight lost during the competition, and their resting metabolic rates (RMR) remained unusually low.

In fact, the authors wrote, "Despite substantial weight regain in the 6 years following participation in 'The Biggest Loser,' RMR remained suppressed at the same average level as at the end of the weight loss competition." That meant that in order to avoid gaining weight, they would have to consume an average of 500 fewer calories per day than other people their size.

The researchers say this is the first study to evaluate people who've been obese and then lost weight through intensive diet and exercise over so many years. And obesity experts said it supports previous research and what they've seen in their patient populations -- that it's really hard for people who've been obese and then lose a lot of weight to maintain their lower weight, or to lose weight again after they've buoyed back up to a higher weight.

One previous study showed that study participants who had lost weight had a 3 to 5 percent lower RMR compared with control subjects who had not lost weight.

More than a third of American adults -- 78.6 million people -- are obese, according to the U.S. Centers for Disease Control and Prevention.

Dr. William Yancy, director of the Duke Diet and Fitness Center, said "The Biggest Loser" perpetuates the idea that the recipe for weight loss is simple: diet and exercise and you can drop the weight. But he said the study helps show how much more complicated an equation it is to keep the weight off for the long term.

"There's that constant mentality that if you diet and exercise to lose weight it can be fixed. But it's a lifelong challenge and we've struggled really hard to make it be seen like diabetes, that it [obesity] needs to be treated like a chronic illness," said Yancy.

"It's not a lifestyle problem," said Yancy. "This study suggests metabolic rate declines more than you would expect, that for a person normally this size, it was lower. So if they were 400 pounds and got down to 300 pounds, their metabolic rate at 300 pounds was lower than someone else who was 300 pounds who had just gradually gained weight and had not lost any."

Yancy said factors such as age, hormones, and diet content -- the balance of carbohydrates, proteins, and fats -- also play into weight loss and weight gain.

"All of our efforts have been on caloric deprivation, but that's only half the equation. We need the other half to counteract the metabolic recoiling. And we have to stop blaming the individuals," he said.

"Instead of putting staircases in dreary places, we should put music and lights in them," said Roslin. "The healthy diet and activity strategies are 100 percent true, but once you develop your body type it's too late."

The diet trend of taking fat out of the diet led to a higher consumption of carbohydrates, especially simple carbohydrates, further impacting metabolism, Roslin added.

Yancy said for "The Biggest Loser" participants and others like them, it's got to be disheartening to lose so much weight and then gain it back, but he encouraged people not to lose hope. He said that he's seen people manage to keep the weight off when they've approached obesity with the attitude that it's a chronic illness.

"You need continued support and therapy," he said.