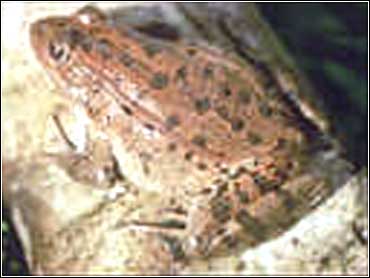 Celebrated for its jumping and protected for its scarcity, the California red-legged frog has won a critical habitat designation on more than 4 million acres of the state.

But the protection doesn't cover the county where Mark Twain set The Celebrated Jumping Frog of Calaveras County, the classic 1865 short story about a frog that could "get over more ground in one straddle than any animal of his breed you ever see."

The irony was not lost on federal officials who approved the final 4.1-million acre plan Tuesday.

"We hope to work with many people in Calaveras County who have expressed to us they would like to have Mark Twain's frog come home," said Patricia Foulk of the U.S. Fish and Wildlife Service.

The frog already was listed as "threatened," but the new designation by the Fish and Wildlife Service exposes developers to greater federal scrutiny by mapping out where frog populations live or could recover.

The government had to develop the habitat plan after environmental groups successfully sued, claiming the government had to declare a critical habitat for any species protected under the Endangered Species Act. The amphibians are considered an important indicator species of the health of aquatic areas.

The frogs once numbered in the millions in California but now only four places are known to have populations greater than 350, said Peter Galvin, a conservation biologist for the Center for Biological Diversity.

Not everyone in Calaveras County shares a love for the red-legged frog, which hasn't been found in the county for years.

Since 1928, the bullfrog has taken center stage at the Calaveras County Fair and Jumping Frog Jubilee. Fair organizers and officials lobbied congressman over concerns that designating the county as a protected area for the red-legged frog would send the bullfrog packing and kill the event credited with bringing $1 million a year to the area.

"To establish red-legged frogs in the area they'd have to kill bullfrogs. That's tied to our economy," said Tim Shearer, city administrator for Angels Camp. "If they kill them, the frogs are not there for the tourists."