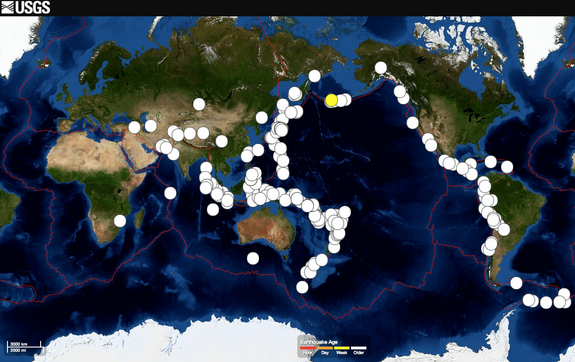 If you think there have been more earthquakes than usual this year, you're right. A new study finds there were more than twice as many big earthquakes in the first quarter of 2014 as compared with the average since 1979.

"We have recently experienced a period that has had one of the highest rates of great earthquakes ever recorded," said lead study author Tom Parsons, a research geophysicist with the U.S. Geological Survey (USGS) in Menlo Park, California.

But even though the global earthquake rate is on the rise, the number of quakes can still be explained by random chance, said Parsons and co-author Eric Geist, also a USGS researcher. Their findings were published online June 21 in the journal Geophysical Research Letters. [Image Gallery: This Millennium's Destructive Earthquakes]

With so many earthquakes rattling the planet in 2014, Parsons actually hoped he might find the opposite -- that the increase in big earthquakes comes from one large quake setting off another huge shaker. Earlier research has shown that seismic waves from one earthquake can travel around the world and trigger tiny temblors elsewhere.

"As our group has been interested in the ability of an earthquake to affect others at a global scale, we wondered if we were seeing it happening. I really expected we would see evidence of something we couldn't explain by randomness," Parsons told Live Science's Our Amazing Planet in an email interview.

The new study isn't the first time researchers have tried and failed to link one earthquake to another in time and across distance. Earlier studies found that the biggest earthquakes on the planet -- the magnitude-8 and magnitude-9 quakes -- typically trigger much smaller jolts, tiny magnitude-2 and magnitude-3 rumblers. Yet, no one has ever proven that large quakes unleash other large quakes. Finding a statistical connection between big earthquakes is a step toward proving such connections takes place.

But despite the recent earthquake storm, the world's great earthquakes still seem to strike at random, the new study found.

The rise in earthquakes is statistically similar to the results of flipping a coin, Parsons said: Sometimes heads or tails will repeat several times in a row, even though the process is random.

"Basically, we can't prove that what we saw during the first part of 2014, as well as since 2010, isn't simply a similar thing to getting six tails in a row," he said.

But Parsons said the statistical findings don't rule out the possibility that the largest earthquakes may trigger one another across great distances. Researchers may simply lack the data to understand such global "communication," he said.

"It's possible that global-level communications happen so infrequently that we haven't seen enough to find it among the larger, rarer events," Parsons said.

However, earthquakes smaller than magnitude-5.6 do cluster on a global scale, the researchers found. This suggests these less-powerful quakes are more likely to be influenced by others -- a finding borne out by previous research.

For example, the number of magnitude-5 earthquakes surged after the catastrophic magnitude-9 earthquakes in Japan and Sumatra, even at distances greater than 620 miles (1,000 kilometers), earlier studies found.

The following is a transcript of an interview with former FDA Commissioner Scott Gottlieb that aired November 29, 2020, on "Face the Nation."