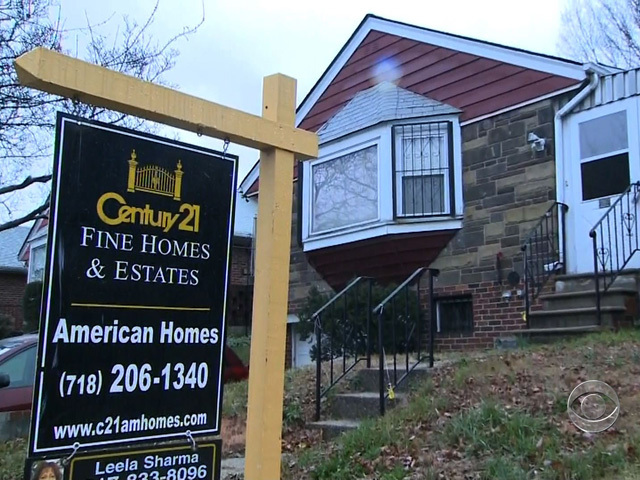 The economy remains the number one issue in the election and the housing crisis remains a drag on the recovery. On Tuesday, the Case-Shiller index said year-over-year home prices fell 3.4 percent. In Atlanta, home prices dropped 11.7 percent; 8.4 percent in Minneapolis; and 4.9 percent in Los Angeles. CBS News correspondent Lee Cowan looks at the situation in L.A.

In the City of Angels, the housing market this holiday season was anything but charitable. For a second straight month, home prices dipped by more than a percent just in October.

Terre Steinbeck finally sold this five-bedroom, four-and-a-half bath home this month, but had to take a third off the asking price to do it.

"Given the way the market is, did the owners have a sense they were going to take a bit of a bath on this?" Cowan asked Steinbeck.

A lost check and a found purpose

"They knew they were going to have to take a bath," she said, "but not nearly as much as they ended up taking. Even the appraiser was surprised how low it sold for."

Los Angeles is just one of 19 cities that showed a decline in home prices -- and not even some of the lowest mortgage rates in history helped.

"They could be giving zero percent mortgages," said Steinbeck. "If you can't get a loan, the mortgage rate being low doesn't really matter."

Many potential buys have been fleeing to the rental market instead, leaving the demand for existing housing weak at best. Since the housing bubble burst five years ago, homes have lost roughly 32 percent of their value -- down to prices not seen in some places since 2003.

No place has fared worse than Atlanta over the last year. But for buyers it's one of the best, which has been keeping realtor Sandy Abrams busier than ever.

"I feel badly for the sellers that are losing," said Abrams, "and I feel good that the buyers are making good buys. But I think that all in all, things are really going to be turning around very soon."

But there are still an awful lot of buyers who are still waiting it out, thinking that prices are going to drop even further. And given the number of foreclosures that are still in the pipeline -- a lot of analysts think that is exactly what's going to happen -- and that in turn leaves the buyers and the sellers looking for a bottom in this market. Some predict that won't happen until midway through next year at the earliest.