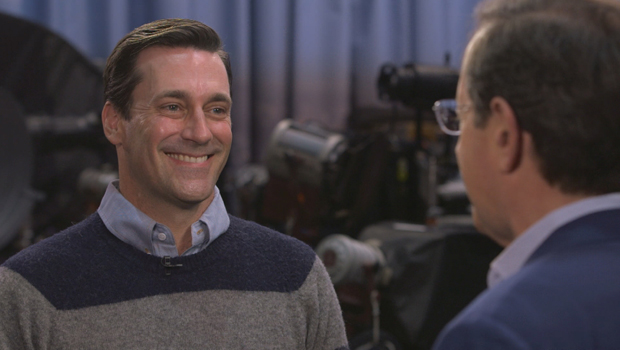 Viewers who are MAD about the TV series "Mad Men" have just two weeks to go until the start of its final season. Anthony Mason takes us behind the scenes:

As the final episodes of "Mad Men," the show created by Matthew Weiner, were being shot on a soundstage in Los Angeles, Jon Hamm (who plays Don Draper) was confronting the beginning of the end:


"By the time we wrap it'll be almost a full decade that we've been working on the show, from the first day of the pilot to the last day of shooting," he said.

"Well, I think Matt might disagree with you when you say that I created him!" Hamm laughed.

"He gives you a lot of credit."

"I've certainly been living in his suit for a while, walking around in his shoes. It's going to be hard. It's, for better and worse, the most defining role that I've ever played."

Reporter: "Who is Don Draper?"
Draper: "Well, as I said before, I'm from the Midwest. We were taught that it's not polite to talk about yourself."

Don Draper has carried a briefcase full of secrets through the seven seasons of "Mad Men." He's hidden his real name, a sketchy past, and innumerable affairs. But for 1960s America, swelling with post-war promise, Don Draper was the perfect salesman, a golden boy in Madison Avenue's Golden Age.

Draper: "Advertising is based on one thing: Happiness. And you know what happiness is? Happiness is the smell of a new car. It's freedom from fear. It's a billboard on the side of the road that screams with reassurance that whatever you're doing, it's okay."

Hamm has made Draper his own, but the AMC Network was reluctant to cast him at first. He had to audition eight times.

"Yeah, you know, you're just waiting to fail," Hamm said. "That's gonna be my autobiography: 'Waiting to Fail.'"

So why did he want this part? "I'd never read anything like it," he said.

"It's been quite a journey for you," said Mason.

"Yeah, I'm certainly not the same person that I was when I started the show. I was 35 years old. I had done, you know, some work here and there. But I have been afforded opportunities that when I graduated college with an English degree and a theatre minor I thought, 'Well, maybe someday I'll get five lines on '90210,'" he laughed. "And it's worked out a little better than that."

So why, Mason asked Matthew Weiner, does Hamm think people are so interested in Draper? "Because he's not a particularly likeable guy when you write it all down."


"I'm puzzled by the concept of likeability," replied Weiner. "There's no character that is interesting to anyone who is likeable. You know, you should watch 'Mary Poppins' again."

Weiner wrote the pilot for "Mad Men" 15 years ago, while he was still working as a comedy writer on the series "Becker."

That first script "got rejected everywhere -- I mean, every single place that exists," Weiner said.

It was five years before AMC, a network that until then had never produced a drama, finally picked it up.

"When people were talking about AMC at the beginning, they were like, 'Who are these people? You're gonna be their experiment, and they may not even really want to be in original programming,'" said Weiner. " And I'm like, 'Nobody else wanted to make the show. They're my heroes!'

"This is, you know, 'Don't call my girlfriend ugly, she loves me!'"

The show that no one wanted has won 15 Emmy Awards, including four straight for Outstanding Drama. And its influence has exceeded its audience -- its period detail sparking a renaissance of '60s design and fashion.

The series has time-traveled the decade, from the Nixon-Kennedy election ("Consider the product: He's young, handsome, a Navy hero. Honestly, it shouldn't be too hard to convince America Dick Nixon is a winner") to the moon landing.

As the sideburns got longer, the bar never seemed to close -- and the women fought their way up in the workplace.

Jessica Pare, who joined the cast in the fourth season, didn't expect her character to take off quite the way she did. "No, absolutely not," she told Mason. "I had auditioned for a small part. It didn't have a name yet. There were no scenes written for her at that point."

As Megan, a receptionist, she started with just two words in her first episode ... became Don's secretary ... and, by the end of the season, his fiancee.

"You got noticed!" said Mason.

And in one of "Mad Men"'s most memorable scenes, Megan serenaded her new husband at a surprise birthday party in their apartment.

"Well, if I am known for the rest of my life for 'Zou Bisou Bisou,' I will be one lucky girl," Pare told Mason. "I'm really proud of that. And it's one of my favorite moments on the show. And one of the favorites of my career."

Mason asked Weiner, "Do you feel any kind of great sense of responsibility in the way you end this for all the viewers who've become addicted to it?"

"Yes," he said. "I mean, people are going to hate it no matter what on some level, some people, because they don't want it to end. I under stand that. But I also don't have the responsibility to answer some great mystery. There's no whodunit."

For Weiner, who first jotted down ideas for the show back in the '90s, the end has been overwhelming: "I emotionally have not dealt with it yet. I'm trying to use it in my work because I can feel it creeping in."

"What do you feel creeping in?"

"The profundity of that -- of ending what is, to this point, my life's work."

Draper: "Nostalgia -- it's delicate, but potent."

In May, when the 92nd and last episode of "Mad Men" airs, the '60s will come to a close again ... and for Jon Hamm, Don Draper will fade out, but not fade away.

Mason asked, "How do you think you're going to feel about this character in 10 years?"

"I think I'll still be very grateful," he said. "These don't come along that often for anybody. You're lucky if you get one! And I've fortunately happened to be at the right place, in the right time, with the right character and the right guy writing it. I think about it every day, and I'm thankful for it every day."

To watch a trailer for season seven of "Mad Men," click on the video player below.