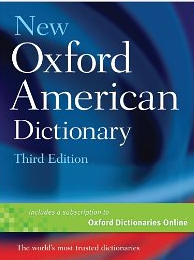 In another sign that the digital world is permeating society, the Oxford American Dictionary revealed additions to its lexicon last week, adopting the language of texting, tweeting and social networking. Below are some of the new inclusions:

BFF n. (pl. BFFs) informal a girl's best friend: my BFF's boyfriend is cheating on her. - ORIGIN 1996: from the initial letters of best friend forever.

cloud computing n. the practice of using a network of remote servers hosted on the Internet to store, manage, and process data, rather than a local server or a personal computer.

green-collar adj. denoting or relating to employment concerned with products and services designed to improve the quality of the environment: green-collar jobs. - ORIGIN on the pattern of white-collar and blue-collar.

hashtag n. (on social networking websites such as Twitter) a hash or pound sign (#) used to identify a particular keyword or phrase in a posting.

social networking n. the use of dedicated websites and applications to communicate informally with other users, or to find people with similar interests to oneself.

unfriend v. [with obj.] informal remove (someone) from a list of friends or contacts on a social networking site: she broke up with her boyfriend, but she hasn't unfriended him.

viral - an image, video, advertisement, etc., that is circulated rapidly on the Internet: the rise of virals in online marketing.