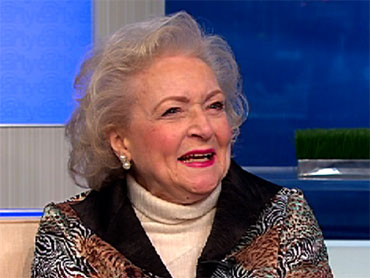 Seven-time Emmy winner Betty White just turned 89, and she'a busier than ever. Not only is she starring in the second season of the TV Land sitcom "Hot in Cleveland," but she'll soon be seen in a very different type of project, the CBS Hallmark Hall of Fame TV movie "The Lost Valentine."

Of her busy schedule, White told "Early Show" co-anchor Erica Hill, "It's wonderful. At 89, you don't expect to be working this much. But I enjoy it."

Hill remarked, "Yeah, you're nonstop. Not only the TV movie and the series, but there was the Snickers commercials, there was 'Saturday Night Live.' The Emmy. I read at one point you were getting a little concerned about overexposure."

Hill responded, "You really think people do that? I think they say, 'Give me more!"'

White said working in her eighties is still fun -- and a privilege. She said, "When it can still be fun, and you're working, I'm in the middle of writing another book, so it's -- that's the deadline that keeps doing this. But, I've been so lucky with some good projects. And that's fun. And I'm having a ball with 'Hot in Cleveland' with the girls."

White is back for a second season on the show with Valerie Bertinelli, Wendie Malick and Jane Leeves.

White, whose schedule was packed at the time she was approached for the show, initially said she'd do the pilot, but wouldn't commit to the entire series.

White, known for her comedy, took a turn toward the dramatic in "The Lost Valentine," but as Hill said, "It's a beautiful movie. I said to you before we started, it is wonderfully sappy in this very best possible way. It tugs at your heartstrings. It's a beautiful love story."

White plays a woman whose love for her husband, who died in World War II, endures. White said she drew heavily on her relationship with her own husband as she was preparing for the role.

"I happen to have been married to a man a loved very, very dearly. Still do," White said. "And that was my war, you know, so I knew the era quite well. And it brought back a flood of memories."

The soldiers featured in the film, White pointed out, "were all real veterans. And the color guard of sailors, those were real sailors. They weren't actors. And that's what got to me."

Hill said, "It's a moving story. It's a beautiful movie. And it's so interesting to see you in another role in which we, I think, fall even more in love with you."

Hill replied, "I did. I really did. I'm not just saying it, I promise."

Hill finished for her with a laugh, saying, "Either way, you'll take it!."

The Hallmark Hall of Fame presentation "The Lost Valentine" airs Sunday at 9/8 Central time on CBS.

"Smoking Baby" Stops Smoking - But Can It Last?