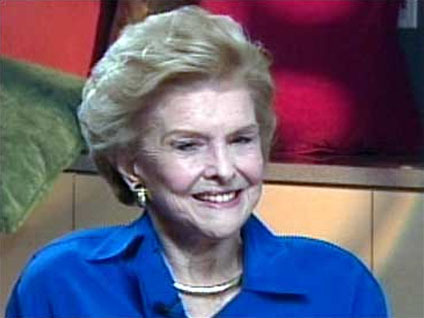 Betty Ford was a First Lady like no other - a breath of fresh air when the country needed it most. Which is why the news of her death on Friday has touched so many people. John Blackstone has prepared this appreciation:

Betty Ford was a woman of openness and honesty ... an unexpected gift to America at a time of political turmoil.

In 1974 as scandals destroyed Richard Nixon's administration, Gerald Ford made the unlikely leap from Congressman to President ...

"I am indebted to no man, and only to one woman, my dear wife Betty," he said.

Betty Ford made her own unlikely leap from obscurity as a Michigan mother and housewife to First Lady.

She told "60 Minutes"' Morley Safer: I told my husband, 'If we have to go the White House, OK, I will go. But I'm going as myself and it's too late to change my pattern. And if they don't like it, they'll just have to throw me out!'"

Betty Bloomer grew up in Grand Rapids Mich. At 20 she moved to New York City where danced with famed choreographer Martha Graham's troupe at Carnegie Hall.

At her mother's urging she returned to Grand Rapids, where she married William Warren, an old school friend. The marriage didn't last, and in 1947 she met a Grand Rapids lawyer, Gerald Ford.

They got married just before he was elected to Congress in 1948.

In a "60 Minutes" interview with Safer in 1975 she made it clear the White House had not changed her:

"You can ask me any question. I'm perfectly happy to answer and give you my idea and I'm sure my husband won't mind at all."

She was frank, even if her views didn't seem in keeping for the wife of a Republican president. He opposed the Equal Rights Amendment. She supported it.

"We kid about it," she said. "And I often say, "Well, I can remember well, there was a time when we couldn't even vote!'"

She applauded the Supreme Court decision on Roe v. Wade.

"I feel very strongly that it was the best thing in the world when the Supreme Court voted to legalize abortion," she told Safer, "and, in my words, bring it out of the back woods and put it in the hospitals where it belongs. I thought it was a great, great decision."

She talked about things that in the 1970s were often taboo, like seeing a psychiatrist.

"I was a little beaten down, and he built up my ego," she said.

She accepted that her 18-year-old daughter might have premarital sex.

"Well, I wouldn't be surprised - I think she's a perfectly normal human being, like all young girls," she told Safer.

She even hinted at life in the White House bedroom when asked about the President admiring other women.

"When he stops looking, then I'm going to begin to worry," she said. "But right now he still enjoys a pretty girl. And he really doesn't have time for outside entertainment, because I keep him busy!"

Her willingness to talk about anything had already earned her credit for saving lives. Weeks after moving into the White House, she was diagnosed with breast cancer and had a mastectomy. At a time when most did not speak about such things publicly ... Betty Ford did.

"I'll never forget the day that I was told I would have to have a mastectomy," she said at a press conference. "My reaction to the words was totally, total denial."

She used her experience to urge other woman to get examinations, though as she told Leslie Stahl of "60 Minutes" in 1997, it did take some nerve.

"Well, it was gutsy the first time I appeared at a state dinner and I walked down those stairs, and I just knew all eyes were upon me, and they were probably saying, 'Which one did they say it was?'"

And when Gerald Ford lost to Jimmy Carter in the 1976 presidential election, she delivered the concession speech when he complained of laryngitis.

"Let me call on the real spokesman for the family," he said.

When they moved out of the White House, Gerald and Betty Ford retired to California, and it was there that her family realized - for all her openness - she was keeping one terrible secret: Her growing addiction to pain relievers and alcohol.

By 1978 her addiction could no longer be ignored. Her family gathered at the Fords' retirement home in Palm Springs to push her to get treatment.

"Fortunately my family saw the problem," Betty Ford said in a 2003 interview with Hattie Kauffman. "And they got professional help to come and help them to do what we refer to as an intervention."

With that help she overcame her addiction and once again used her own experience to give to others.

"They have to know there's help for them," she said. "There's not only help but there's hope for them."

She helped found the Betty Ford Treatment Center. While it's become well-known for celebrity rehab, most of the 90,000 who have come through its doors are not famous.

"I still get notes from women who are celebrating maybe their 15th or 20th anniversary, and they thank me from the standpoint of making it OK to go for treatment," she said.

Her last appearance was at President Ford's state funeral in 2006, saying goodbye to her husband of 58 years.

She will be buried beside him at his Presidential Museum in Grand Rapids, Michigan.

But Betty Ford's real monument will be her treatment center, where she's remembered as a woman who was strong enough to admit her weakness.