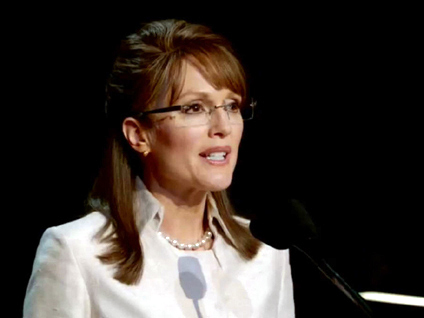 (CBS News) What better time to call to mind the 2008 presidential election than the middle of the 2012 presidential primaries.

HBO is ready to refresh our memories with its broadcast Saturday night of a movie version of "Game Change," the Mark Halperin book about the last election.

Even before it airs, the movie has been condemned by former and current Palin aides as "sick" and inaccurate.

On the big screen, viewers can have their choice of several new offerings including the heavily hyped "John Carter," an action-adventure set on Mars, a planet populated by 12-foot-tall giants.

Also opening Friday are "Friends with Kids," a comedy with Jon Hamm and Anne Hathaway, "A Thousand Words," a comedy with Eddie Murphy and Allison Janney, and "Salmon Fishing in the Yemen," a CBS drama starring Kristin Scott Thomas, Ewan McGregor and Emily Blunt.

Coming to DVD Tuesday is the "Footloose" remake with Juluanne Hough and Kenny Wormold; "The Skin I Live In," a Pedro Almodovar's drama with Antonio Banderas; and the first season of "Game of Thrones."

Music lovers have been waiting for weeks for the release Tuesday of the new Bruce Springsteen album "Wrecking Ball."

The Boss' 17th studio album explores the economic frustration of those living on the cusp of poverty and includes "We Take Care of Our Own," the song Springsteen and his E Street Band debuted at the Grammys.

Fans of adventure author Clive Cussler can look forward to the publication Tuesday of "The Thief: An Isaac Bell Adventure." Part of a series set in the last century, the book was written with Justin Scott and is being published by Putnam. Also out Tuesday is "Carry the One," a new novel by Carol Anshaw.