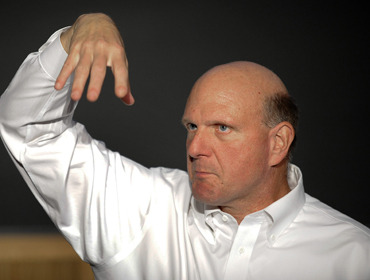 As grumbles grow on Wall Street about Microsoft's stock performance, chief executive Steve Ballmer today promised that Windows-based tablet computers will be ready to compete against Apple's iPad in time for the all-important fourth quarter.

"You'll see new slates with Windows on them. You'll see them this Christmas, you'll see them continue to change in the fall," Ballmer said in a Q&A session after a speech at the London School of Economics.

"Certainly we have done work around the tablet as both a productivity device and a consumption device," Ballmer said, without getting more specific about Microsoft's plans.

That prediction comes as a report from the firm Bernstein Research finds that Apple has sold 3 million iPads in the 80 days since its debut. Colin McGranahan, the retail analyst who wrote the report, described the iPad as "a runaway success of unprecedented proportion."

The absence of viable competition to the iPad was one reason why Goldman Sachs downgraded Microsoft. Also, Janney Capital cut its rating on Microsoft, showing increasing impatience with the company's dismal stock performance since the spring. If he's paying attention to the criticism, Ballmer's not letting on. Responding to questions in London about how he thought Microsoft was doing, he kept a proper stiff upper lip and painted an optimistic picture:

"Pretty darn good. Could be better, always could be better. But we're a company that, I don't know, will make about $26 billion profit pretax (this year). I can only think of one company in the world that makes more than that so I'm not going to be apologetic for our financial results."

The immediate problem is that Microsoft has been talking a big game for months with not much to show. In January, Microsoft's CEO showed off a Windows-based tablet computer said to be under development. But HP hasn't yet offered more details about the device, especially since buying Palm. Its Windows Phone 7 software is on tap for its official release on Oct. 11, about a long delay that's raised questions about Microsoft's handset strategy. In a recent interview Ballmer seemed to acknowledge missteps but still argued that his company was ready to present a convincing story to consumers.

"In a sense, you could say we missed a cycle. We had some execution issues from an R&D perspective. In the time frame since the last significant release certainly the industry has moved, the technology has moved, the hardware has moved. Microsoft plans to unveil a lineup of smartphones using the revamped version of its mobile operating system in early October. This launch is crucial for Microsoft, which has been battered by Apple's iPhone and Google's Android mobile software. We said, we've got to move forward, not shoot for yesterday. We've got to shoot ahead in a way that's delightful to users, accessible to developers and prioritize everything else we do around those elements."

The challenge now is to make good on that promise without again slipping up. If he can't, the chorus calling for a change at the top will grow ever louder.