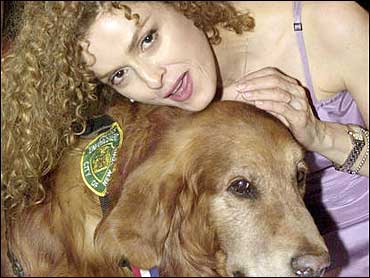 Want to adopt a dog or cat? Try Broadway!

Broadway Barks is a dog and cat adopt-a-thon that benefits New York City's animal shelters and adoption agencies. The annual event, which is in its eighth year, is produced by Broadway Cares/Equity Fights AIDS and takes place Saturday, July 8, 2006, in NYC's Shubert Alley, located between 44th and 45th Streets, between Broadway and Eighth Avenue.

Two-time Tony Award winner Bernadette Peters, a co-creator of the event and co-host (with Mary Tyler Moore) dropped by The Saturday Early Show to show a few of the pooches up for adoption and to talk about the event. (The ASPCA is an official sponsor.)

Peters, who has just returned from Italy where she was working on a film, herself has two adopted dogs, Kramer and Stella.

Broadway Barks 8! festivities begin at 3:30 p.m. Celebrity presentations of pets from citywide animal shelters will take place between 5:30 and 6:30.

Last year's Broadway Barks attracted an audience of more than 6,000 theater fans, pet owners, and animal lovers, and featured the participation of more than 24 animal shelters from the New York area.

The event also features an auction of celebrity-autographed memorabilia. Additional auction merchandise will be available via the Internet by logging on to www.eBay.com and using the key words "Bernadette Peters." Proceeds from the auction and other donations received during the day will benefit the shelters and organizations attending Broadway Barks 8!

Peters has won Tony Awards for "Song and Dance" (1985) and a revival of "Annie Get Your Gun" (1999). This past May, she performed at Lincoln Center's Avery Fisher Hall. Most recently, Peters guest-starred on one of the final episodes of "Will and Grace" in the role of Karen's sister.