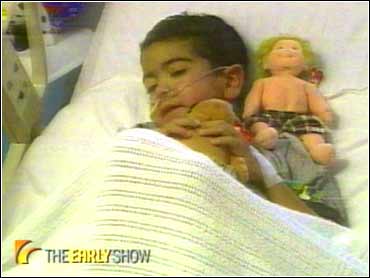 Seven-year-old Carlos Ochoa was a little boy with a big medical problem. In May his failing heart had started to give out, and he had to be resuscitated –- twice. Doctors gave him just days to live.

What Carlos needed was a heart transplant. But to keep his weakened heart working while a donor was found, he needed a heart pump. The problem was that in this country, pumps are made for adults. Carlos was just seven, and small for his age.

Dr. Arabia recalled the desperate situation Carlos was in before he received the "Berlin Heart."

"He was deteriorating rapidly and when we decided to actually take him to the operating room and place a pump in, he probably had about 24, 48 hours of life left," said Dr. Arabia.

Dr. Arabia knew that a child-sized artificial heart pump in Germany called the "Berlin Heart" had been used successfully on 35 European children. Although the device hadn't gone through the FDA approval process, the FDA did grant a one-time "compassionate use allowance" for Carlos.

So Carlos became the first patient in America to receive the "Berlin Heart."

When Carlos woke up from being implanted, he was no longer purple, he was warm and his kidneys were starting to get back to normal.

The device supplanted the work of Carlos' heart for five weeks, until he received a donor heart transplant. It also reversed some of the damage to his system and made him stronger for the transplant.

Carlos' parents and doctors are advocates for quick FDA approval of the Berlin Heart.

"We hope that with time, we will be allowed to use it more freely in this country," said Dr. Arabia.

The manufacturer of the Berlin Heart is beginning the process for an FDA review. It's possible that the device will be receive FDA approval by the end of the year.