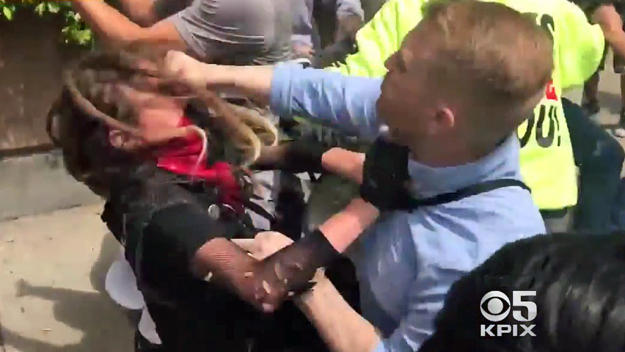 BERKELEY — In the wake of Saturday’s protest violence in Berkeley, videos and photos of the brawls that broke out have been circulating online, CBS San Francisco reported.

One clip, in particular, is sparking outrage at a known white supremacist, a student at California State University, Stanislaus.

Of all the fist-fights, explosions and bloody brawls that broke out at Saturday’s so-called “Patriots Day” protest in downtown Berkeley, one moment stood out.

In a video posted to social media, a young woman — apparently protesting President Trump — is seen being sucker-punched.

A reverse-angle picture shows her own fist extended as well. The video and image have gone viral — not least because the man throwing the punch is Nathan Damigo, founder of the white supremacist organization known as “Identity Europa.”

CBS San Francisco attempted to make contact with the woman, who goes by the name Louise Rosealma. A fundraising page for her says that, since the protest, she has received rape and murder threats online. It’s unclear whether Berkeley police are investigating the incident or Nathan Damigo.

CBS San Francisco attempted to reach Damigo for comment but he has not replied.

CBS Sacramento reports that Damigo has been a controversial figure at Stanislaus State University. The self-proclaimed white nationalist once tweeted that, “Non-Whites are incapable of replicating White culture.” The 30-year-old was given a less than honorable discharge from the military, after two tours of Iraq.