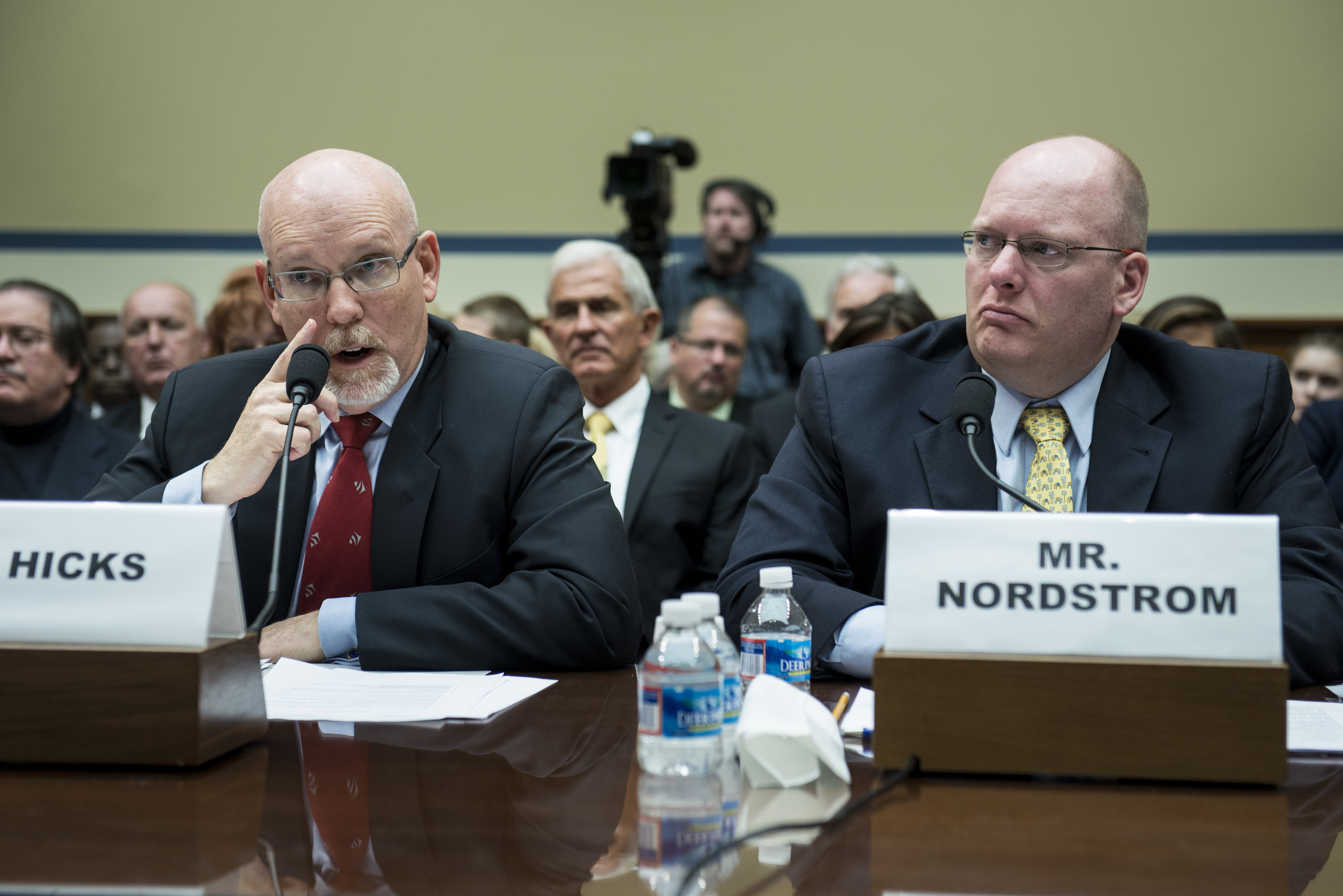 In a much-anticipated congressional testimony before the House Oversight Committee, three U.S. officials who were stationed in Libya during the September 11 terrorist attacks in Benghazi delivered emotional accounts of the events that unfolded on the incident and its aftermath. They also criticized the United States for issuing stand-down orders to special forces to assist in the response there, arguing that such forces could have mitigated the attack's damage had they been promptly deployed.

Speaking publicly for the first time since the attacks, Mark Thompson, the acting deputy assistant Secretary of State for counterterrorism; Greg Hicks, former deputy chief of mission in Libya; and Eric Nordstrom, former regional security officer in Libya, provided perhaps the most detailed public record of what, from their perspectives, happened on the night of September 11, and what might have been done differently.

"As I remember September 11, 2012 it was a routine day at our embassy," said Hicks, who was stationed in Tripoli, beginning a lengthy description of what he believes happened on that day. Hicks remembered being at his "villa," watching a favorite television show, when he received word that the consulate in Benghazi was under attack. He recalled a conversation with U.S. Ambassador Chris Stevens - who was ultimately killed in the attacks - telling him "we're under attack" in Benghazi, before being cut off.

Detailing the various events that unfolded over the course of the next day, Hicks and Thompson largely praised the U.S. officials involved in the operation, growing emotional when speaking of their courageous actions aimed at saving lives and keeping Americans safe. But both questioned the Obama administration's decision not to deploy a Foreign Emergency Support Team (FEST) to Benghazi in light of ongoing instability in the region.

"When I heard that the situation had evolved to them going to a safe haven and then the fact that we could not find the ambassador, I alerted my leadership indicating that we needed to go forward and consider the deployment of the foreign emergency support team," Thompson said Wednesday. He clarified that the National Security Council has the power to authorize FEST, and said he "notified the White House" about his request.

"They indicated that meetings had already taken place that evening that had taken FEST out of the menu of options," Thompson said. "I called the office within the State Department that had been represented there asking them why it had been taken off the table and was told that it was not the right time and it was not the team that needed to go right then."

Rep. Elijah Cummings, D-Md., recalled that in an earlier meeting with committee staff, Hicks argued that "if we had been able to scramble a fighter or aircraft or two over Benghazi as quickly as possible after the attack commenced, I believe there would not have been a mortar attack on the annex in the morning" that resulted in two American deaths.

"I believe the Libyans would have split," he said in that testimony.

As Rep. Elijah Cummings, D-Md., pointed out during the hearing, both Former Defense Secretary Leon Panetta and Army Gen. Martin Dempsey, chairman of the Joint Chiefs of Staff, have previously explained the decision not to deploy special forces to Benghazi during the attacks. Panetta said the only available resources would have taken at least nine hours to reach Benghazi.

"This was pure and simple a problem of distance and time," Panetta said in his testimony this year.

Asked if he disputed this assessment, Hicks said the defense attaché with whom he had spoken at the time told him fighter aircraft in Aviano would not be able to reach Benghazi "before two to three hours."

In the months after the Benghazi attacks, the sequence of events, and the intelligence surrounding those events, has been a near-constant source of controversy and politicization in Washington. Panetta, former Secretary of State Hillary Clinton, former acting CIA Director Mike Morell, U.N. Ambassador Susan Rice, and Dempsey have all delivered testimony on the subject in a series of hearings and private meetings with lawmakers of both parties.

The testimony of Hicks, Thompson and Nordstrom, however, was expected to be enormously at odds with the White House; the three men claimed they were barred from sharing their stories in public - a charge the White House denied -- and were dubbed "whistleblowers" even by Rep. James Clyburn, D-S.C., who used the term in his remarks on Wednesday.

During the hearing, Democrats complained that they were denied access to the witnesses in advance - which Republican lawmakers were granted - and accused Republicans of exploiting the witnesses for political purposes.

"On behalf of this Congress and a grateful nation, I say thank you. I am glad the whistleblowers are here, and I will do every single thing in my power to protect the whistleblowers," Cummings said in his opening testimony. "I am not questioning the motives of our witnesses. I am questioning the motives of those who want to use their statements for political purposes."

He lambasted committee chair Darrell Issa, R-Calif., for accusing the Obama administration of "intentionally withholding military assets which could have helped save lives on the night of the attacks," an allegation he said was as "troubling" as it was "simply untrue," if the testimony of top military commanders is to be believed.

Republicans, meanwhile, re-upped criticism of how Secretary Clinton and U.N. Ambassador Rice responded to the situation in their various roles: Hicks alleged that a lawyer told him not to allow himself "to be personally interviewed" by Rep. Jason Chaffetz, R-Utah, and that he was generally not allowed to participate in meetings about the incident unless a State Department lawyer was present.

Philippe Reines, Clinton's longtime aide, told NBC Wednesday a lawyer was sent to meetings with diplomats because some at the Tripoli Embassy were uncomfortable with the interactions with Chaffetz, who would not let Democratas participate.

"we were hearing from our people in Libya that some at Embassy Tripoli were left unsettled by their interactions with the [congressional delegation] - which was made up of only [Jason] Chaffetz because he refused to allow any minority member to join him... - and the position they felt they were being put in," Reines told NBC's Andrea Mitchell. "State sent a legal advisor as sop to Tripoli so that any personnel on the ground who wanted their advice or presence for any conversation could avail themselves of that option. For their own protection and comfort. Chaffetz refused to let this person on government plane, and resented his being in Tripoli (after he was forced to fly there on his own). And he decided he didn't want this person around."

Reines said if individuals "didn't feel a need" for the legal adviser, "they didn't have to take it."

"And nobody was told to keep Chaffetz from speaking with anyone. That's completely at odds with the cooperative approach the Department has taken with the Congress - all eight of the committees looking into this - from day one, until today," he continued.

Rehashing harsh criticism at Rice over comments she made on talk shows several days after the attacks, Hicks also expressed surprise and "embarrassment" at her allegation that a protest might have had something to do with the incident on September 11.

Hicks said no information he was aware of would have led him to believe any protests had taken place, and said he was "stunned" when he learned of her comments.

"My jaw dropped," he said. "And I was embarrassed."

Hicks said Rice had not consulted him before going on the morning shows, and he added that when he asked Acting Assistant Secretary for Near Eastern Affairs Beth Jones why Rice referenced a demonstration in her appearances, he "got the sense I needed to stop that line of questioning."

Asked whether the White House is "confident" then-Secretary of State Clinton "acted appropriately" before, during, and after the attack, White House press secretary Jay Carney said Wednesday "We are." He said that the State Department's internal review of the response to Benghazi included critiques and policy suggestions that were fully heeded by Clinton.