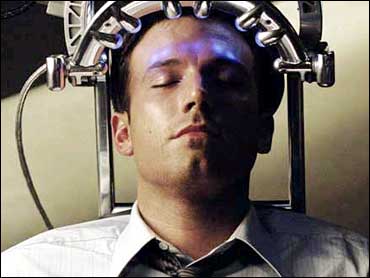 In the action thriller "Paycheck," Ben Affleck plays an engineer trying to escape a corporation that erased his memory and wants him dead.

Affleck tells The Early Show co-anchor Hannah Storm that the story was written by Philip K, Dick, who also was involved in "Blade Runner," "Minority Report" and "Totall Recall," which he points out did well in the box office.

Referring to the latter, Alffleck says, "And launched a governor in one particular state. I think that's California's governor's best movie." Having political aspirations of his own, Affleck says, it is hard to comment on Governor Arnold Schwarzenegger's work in office.

"He's just sort of putting it together. It certainly is emblematic that the line has been blurred between politics and show business pretty well by now," he says.

As for his work in director John Woo's "Paycheck," Affleck plays Michael Jennings who after completing his latest project is expected a large paycheck. Instead, the brilliant engineer is given an envelope of random objects and told that he has agreed to forfeit all payment.

With his memory erased per his contract, Jennings has no defense, until he discovers that the objects are clues to his past.

With the help of the mysterious Rachel (Uma Thurman), Jennings races against time to put the pieces of his past together.

One of the plots of the film, Affleck notes, is, "I find out we built a computer that is so massive and able to calculate and take every possible eventuality into the future."

In real life, Affleck is into high-tech gadgets as well. Reportedly, he has seven computers at home.

"Well, yeah," he says. "I kind of, like, harvest old parts. They get obsolete so fast and the truth is mostly for nonlinear editing like Avid and for games. I know I'm a grown man. But I like the games."

He is also known to be a Red Sox fan. He even wrote the name of the team into the script.

Affleck explains, "Here is the thing. The script was in there that this guy was a big sports fan but they had he was a big Mets fan. You folks here in New York like that but I still have family in Boston. I can't be on screen and talking about my favorite team is the Mets."

As for his love life, he has not let all the publicity around his personal life hinder his work. He says, "I sort of block it out just in general. I don't read those magazines. I never did. I always wondered who is out there reading, like, Bat Boy is Back or the alien stories in the supermarket or the ones where they make up some spat between some couple. Now I see people in the supermarket checking out the tabloids and I'm like, 'don't read that! Don't give them your money!'"

And yet it is not just in tabloids. He says, "It seems weird, a little bit embarrassing, because it seems like an awful lot of attention for not much, really. I sort of try to ignore. My sense is that it's subsided now and it is nice to be promoting a movie that I really like, that's really good. And I feel like there's only so much more you can say about Jen and I, and life kind of goes on."

Some Facts About Ben Affleck