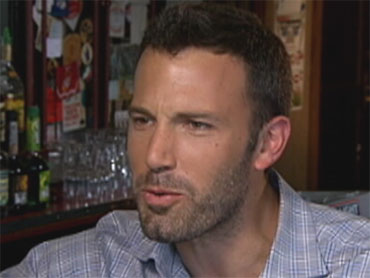 Ben Affleck is one of the biggest names in Hollywood. And he's a pretty big name back in his hometown of Boston as well. Russ Mitchell pays him a visit for this Sunday Profile:

He may be a big-time Hollywood star, but Ben Affleck is a Boston boy at heart.

Affleck has appeared in more than 30 movies, won an Oscar for screenwriting, and now he's on his way to becoming an established director. His second film, "The Town," is out this week.

"Directing is great; it gives you a broader sense of authorship," he said. "And it's much more terrifying when you feel like everything's coming apart and it's not working, 'cause you're responsible for the whole farm, not just the silo of your performance."

The early buzz is that the whole farm is fine. Affleck also stars in this movie about a bank heist turned affair of the heart in the Charlestown section of Boston - and his character wants out.

Yet when it comes to Boston, Ben Affleck can't seem to get enough of this place.

"How much of Boston is in your blood?" Mitchell asked.

"You know, a fair amount," Affleck said. "I mean, it's the only place that I have any frame of reference for."

Born in Berkeley, Calif., he moved as a child to Cambridge. "It was a good neighborhood. It was a part of the city that was, you know, a lot of working people, a lot of sense of community."

His parents divorced, and his mother, a school teacher, raised Ben and his brother Casey (also an actor) as a single mom.

"My mother's best friend was a local casting director here, and she and her partner actually cast me in a couple of little things when I was young," he said. They included a PBS special and, at 16, a Burger King commercial.

"And the Burger King commercial was, like, a big failure, too!" Affleck said. "I mean, how do you fail in a Burger King campaign?

"Oh horrible - it was humiliating."

Somehow, he survived. Besides, he could commiserate with his good buddy and schoolmate, Matt Damon.

"What attracted you guys to each other, you think?" Mitchell asked.

"Hard to say. He lived two blocks away from me. I had done a few acting gigs. He really was interested in being an actor. And, you know, we just had a good time. We became close and we've been close ever since."

Ben took us to his old high school. "They're renovating it, as you can see."

And on its stage he appeared with his brother and Damon. 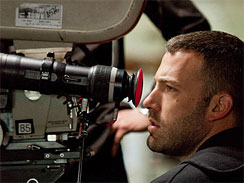 (Warner Bros.)
"And I definitely got a sense of, you know, you can take the bull by the horns, that you can do it and that you can cross those sort of artificial-looking boundaries."

He tried college, but soon moved to Los Angeles, where he landed roles in small films. He got a break as the lead in 1997's romantic comedy "Chasing Amy."

By then Matt Damon had joined Affleck out West, and the two wrote a screenplay about a troubled math genius. They called it "Good Will Hunting." And they insisted that they star in the film themselves.

"We said, 'Well, we don't wanna sell it, you know, we wanna be in it,'" Affleck recalled. "'Good Will Hunting,' obviously, was a product of my hometown, growing up, me, Matt, my brother, you know, and that was a great feeling, finally getting that made."

And for moviegoers, the feeling was mutual. The $15 million film earned more than $200 million worldwide, garnered nine Oscar nominations and won two . . . including a Best Original Screenplay Award for 27-year-old Matt Damon and 25-year-old Ben Affleck.

"What does that do to your head at 25?" Mitchell asked. "You got an Oscar in your hand, your future is unlimited."

"You know, it's one of those things that's hard to grasp when you're a little younger," Affleck said. "Somebody came over to me and was like, 'Well, now you know what the first line of your obituary is gonna be.' I thought, wow. I didn't understand what that even meant, you know?"

One thing it did mean was big roles in big movies . . . saving democracy in "Pearl Harbor" . . . and saving the planet in "Armageddon."

Plus, agonizing as a lawyer in "Changing Lanes."

"For those of us who have never been on the cover of People magazine as the Sexiest Man Alive," Mitchell asked, "Tell me what that's like."

"Yeah, that felt kind of embarrassing, you know?" Affleck said. "It was just a marketing thing. It sells magazines. You know, it could be you, it could be somebody else."

"It's not gonna be me," said Mitchell.

"You never know. Did you fill out your application?"

"I did not. Maybe I should get on that right away."

Affleck said, "I just thought, like, this is just yet another step towards a certain kind of overexposure that happened at that time that I knew was gonna be ultimately not good for me."

And if that overexposure had a name, it would surely be "Bennifer," the tabloid moniker given to Affleck and Jennifer Lopez, his one-time fiancé.

The ups and downs of their two year relationship landed them on cover after cover.

"And then, it seemed like, 'Oh my God, they're everywhere,'" he said. "And that, sort of, I think, really turned people off, was the ubiquity of it. It turned me off."

"Gigli," their 2003 box office bomb, didn't help. Critics called it one of the worst films of the year.

"It's like, you know, head towards the iceberg!" he laughed. "People wanna colder cruise!"

It put a temporary chill in Affleck's career. But he had another goal in mind: directing his first film, the well-received crime thriller "Gone Baby Gone," starring his brother Casey.

"It was scary and it was tough," he said, "but, you know, I don't think anything good isn't scary, I've found. The times that I've been scared, the times I've been forced to work, have been the best experiences for me."

"And you chose not to star in that movie," Mitchell said.

"I didn't think I could do it, frankly. I mean, I thought I had to really get comfortable as a director first."

These days, Affleck is comfortable in all sorts of ways. Married now for five years to actress Jennifer Garner, the couple has two girls.

"There's something about insecurity and fear that's a good motivator," he said. "You know, it keeps you coming to work, working your absolute hardest, and it keeps you on your toes. And I'm in no danger of losing that."