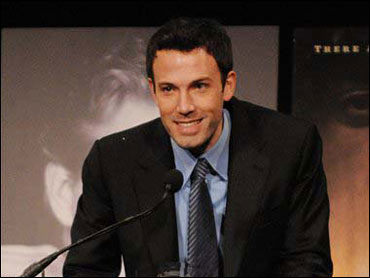 Ben Affleck launched a new initiative Monday to raise money and awareness over atrocities committed against women and children during years of conflict in eastern Congo, Affleck told The Associated Press.

The American actor and director spent five days in the country last week, where he met with former child sex slaves and prisoners convicted of rape in the hope of gaining a better understanding of Congo's troubles.

The new foundation, the Eastern Congo Initiative, will support community-based Congolese groups, said Affleck on the heels of his fifth trip to the country.

"Naturally they were best equipped to solve it. Their impediment was they didn't have the means, the funding," he said.

The new initiative is funded in part by founding member Howard G. Buffett, son of investor Warren Buffet, to whom Affleck pitched his vision of a new aid group by describing eastern Congo's dire situation.

"I want you to know that 3.5 million people have died over the last 12 years. I want you to know about the women who are being raped, about the child soldiers...about the kids I just met who have HIV," Affleck said he told Buffet. "I kind of bored him for two hours and basically twisted his arm."

Affleck declined to say how much money his initiative has raised. It will begin making grants in coming months, he said.

The 37-year-old has been traveling to eastern Congo since 2007 and previously directed a short film called "Gimme Shelter" about the humanitarian crisis there. The country has suffered years of violence and its devastating 1998-2002 war split the vast nation into rival fiefdoms and involved half a dozen African armies.

Affleck said he was insecure about getting involved at first, because of how little he initially knew and for fear of being seen as an arrogant actor. That's why he took five trips into the region before launching his project, he said.

The Eastern Congo Initiative will also push the U.S. government to develop a comprehensive strategy and show more leadership in the region, he said.

One person Affleck met with last week was a 19-year-old woman who was abducted at age 15 by a group of rebels from neighboring Rwanda and was forced to serve as a sex slave to six men for about two years.

She eventually ran away with only the clothes on her back and was taken in by an aid group called Laissez L'Afrique Vivre, or Let Africa Live, that teaches former child soldiers skills like carpentry and sewing.

"A former slave and bush wife to six guys, finds out she's pregnant and she wanted to die, didn't think life was worth living, and a nun from the organization came and found her and brought her in," Affleck said. "She's now going to law school to try to become a lawyer and she said she wants to do women's rights."

It's exactly the kind of aid group that Affleck said his new initiative will support. "I thought these people were pretty great," he said.