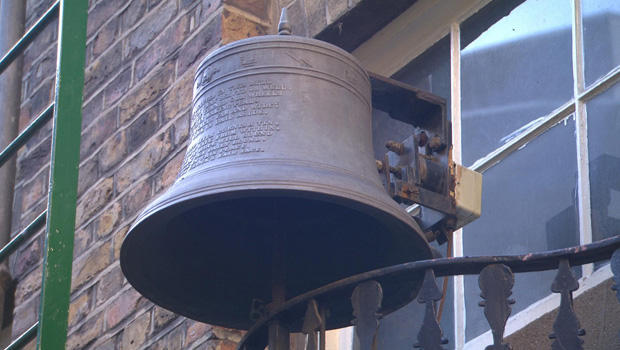 The bells at the National Cathedral in Washington will no doubt be around for a long time. Not so the foundry that cast some of them, however. Turns out, it's that very foundry for which the CLOSING BELL tolls. Jim Axelrod has an appreciation:

There is a certain timelessness inside London's Whitechapel Bell Foundry, where it could be the 21st century, or the 19th, or even earlier.

Alan Hughes' family has owned the foundry since 1904. "I'm surrounded with bells. My whole life has been spent with bells," he said. "And I don't get too excited by it:"

But that's just his family.

And how far back does the Whitechapel Bell Foundry go? "We have always claimed 1570," said Hughes. "Historical researches indicated we were more likely established sometime around 1420."

Which would mean the foundry was in business more than a century before Shakespeare was born. At half a millennium, it is the oldest continually-operating business in the U.K.

But after centuries and centuries, the company that produced the bells for Westminster Abbey, as well as Big Ben, has cast its last.

"We don't need bells," Hughes plaintively explained. "They were needed in the sense that they were the way of communicating basic information to what was then a largely illiterate population. They warned you of invading armies; they actually served a practical purpose. So bells are used today because we like them, not because we need them."

Even if demand were higher, the Whitechapel Foundry is located smack in the middle of one of London's hottest neighborhoods.  That's another rule of modern life: prime real estate tops history.

And it won't just be the Brits losing a connection with their history; we will, too, since the first Liberty Bell was cast here -- not exactly the Liberty Bell they line up to see in Philadelphia, but the grandfather to it -- the first one cast, and later melted down to pour the second and third.

But if you think the end of a 500-year-old era is making Hughes emotional, well, that wouldn't be very British now, would it?

"I suspect that when this workshop is empty, on that occasion, I am entitled to feel something," he said.

"I would think the stiffest of upper lips would waver a touch," said Axelrod.

"I anticipate that that will be the case!"

When asked how he plans to spend his retirement, Hughes replied, "The first week of my retirement I will sleep, 24/7. Then I will get up and reinvent my life."

Awakened by a bell? "Probably!" he laughed.