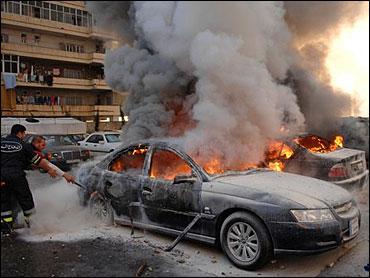 At least three people were killed and dozens were injured before army troops backed by tanks and firing barrages of warning shots into the air dispersed most rioters. The military then declared Beirut's first curfew since 1996.

But the fallout reaches far beyond the casualty count. The clashes, sparked by a cafeteria scuffle between pro-government Sunni Muslims and pro-Hezbollah Shiites, reinforced fears that Lebanon's sectarian divisions are erupting into violence as they did during the 1975-1990 civil war.

It was the third straight day of violence, sparked by a Hezbollah-led strike Tuesday that came ahead of a crucial gathering of donor nations in Paris. The conference Thursday raised pledges of $7.6 billion to help Prime Minister Fuad Saniora's U.S.-backed government rebuild after last summer's devastating Israel-Hezbollah war.

The money and show of international support could boost the embattled Saniora. The Iranian-backed Hezbollah has vowed to bring him down unless the opposition is given more power.

The chaos has paralyzed the government. Hezbollah leader Sheik Hassan Nasrallah said Wednesday that donors were backing the wrong party in the standoff and that he could topple Saniora at any time.

In Paris, Saniora pleaded to his countrymen to "distance themselves from tensions."

"No one can help a country if the people of this country don't want to help themselves," he said. "I call on your wisdom and reason."

Leaders on all sides called for calm. Nasrallah — who has insisted in recent days he does not want Lebanon to tumble into civil war — went on TV in the evening to tell followers it was a "religious duty" to get off the streets to allow security forces to keep order.

"I appeal to you in the name of Lebanon and human conscience ... It's a pity to waste Lebanon like this," said Parliament Speaker Nabih Berri, a Hezbollah ally. "It is time we learn from the past."

During Lebanon's civil war, Christians battled Muslims. But the new confrontation has taken different sectarian lines: Shiites support the opposition, Sunnis back the prime minister and Christian parties are divided between the two camps.

If sectarian divisions explode in Lebanon, it would likely further fuel Sunni-Shiite tensions around the Arab world, already heightened by Iraq's turmoil. Mainly Sunni Arab nations like Egypt and Saudi Arabia have shown alarm at Hezbollah's increasing strength in Lebanon and have backed Saniora.

As the students clashed, U.S. Secretary of State Condoleezza Rice joined other world leaders at an international fund drive in Paris to raise money - and show political support - for Saniora's government.

French President Jacques Chirac told reporters that $7.6 billion dollars in aid and loans had been pledged by the countries and financial organizations in attendance.

"The multibillion dollar donations pledged today in Paris will go a long way to rebuilding the country, but Hezbollah's presence continues to stir the pot of civil unrest and puts a Middle East political solution in jeopardy," said CBS News foreign affairs analyst Pamela Falk from the U.N., where the Security Council discussed what could be done to avoid further violence in Beirut.

Thursday's clashes in Beirut showed just how quickly any spark can turn into a wildfire.

Students said it began with a scuffle in the cafeteria of Beirut Arab University between Sunni Muslims and supporters of the Shiite Hezbollah. As Sunnis in the surrounding Tarik el-Jadideh district moved in, Hezbollah activists called in reinforcements.

Hezbollah activists with walkie-talkies were seen coordinating as a ragtag convoy of hundreds of vigilantes raced to the campus. Gangs — many wearing blue and red construction hard hats and wielding clubs made from sticks and even chair legs — poured into the area and battled Sunni students and riot police and soldiers.

Hezbollah backers claimed Sunni gunmen fired from apartment balconies near the school, wounding several people. The claim could not be independently confirmed.

Thick black smoke rose over the campus and the neighborhood on the southern edge of Beirut as rioters set fire to vehicles, tires and trash. Bands of youths clashed with stones and clubs in running street battles as the army tried to close off streets with tanks and armored vehicles. Troops fired tear gas and warning shots into the air.

Three people were killed and 169 injured, security officials said. It appeared one of the dead was Sunni and the other two Shiite, judging by the district of the hospitals their bodies were taken to.

Up until the 8:30 p.m. curfew was imposed, young men were in the streets around the university. Government backers set fire to the offices of a small pro-Hezbollah party and burned its banner in the street as sporadic gunfire was heard. Hezbollah supporters smashed store windows miles away in downtown Beirut as they left a protest camp ahead of the curfew.

After the curfew began, most streets were emptied. The last time Lebanon imposed a curfew was February 1996 to stop labor unions from holding anti-government protests. In 1984, the army imposed a curfew to halt street battles between the army and Muslim militias.

The alarming violence signaled what Lebanese have been fearing for months: that the drawn-out confrontation between Hezbollah and Saniora's government could move into the streets and rage out of control.

The Hezbollah-led opposition has staged two months of demonstrations and sit-ins in a bid to topple Saniora's government. But the prime minister has held out, refusing the opposition's demands for a veto-wielding share of the Cabinet.

On Tuesday, the opposition stepped up the confrontation with its general strike, which erupted into street battles around the country between its activists and government supporters. Three people were killed. Gunbattles broke out for a second day Wednesday in the northern city of Tripoli.

The alarming violence has stunned supporters of both sides. But the leadership of the two camps do not appear to be backing down.

Hezbollah, in a statement on its television station, accused pro-government factions of provoking the clashes even as it called on its supporters to get off the streets to "avoid a strife which is being inflamed" by pro-government groups.