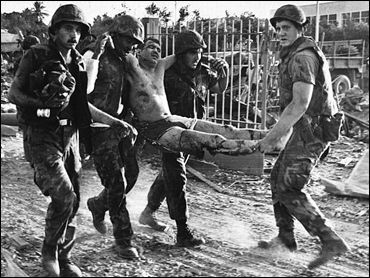 Quiet commemorations were planned Thursday for the 20th anniversary of the bombing of the U.S. Marine barracks in Beirut — the deadliest terrorist attack on Americans prior to Sept. 11.

A truck full of explosives ripped through the Marine barracks on October 23rd, 1983, killing 241 U.S. Marines, sailors and soldiers.

Services were being held at the national Beirut memorial at Camp Lejeune, N.C. Observances include a candlelight vigil and a wreath-laying ceremony, with the names of the Beirut victims read by family members and other veterans.

The Marines were in Lebanon as part of an international peacekeeping force trying to stabilize the country, which had been torn by a civil war between Christians — with their ally Israel — and Muslims.

A U.S. contingent entered Lebanon in July 1982 to oversee the departure of the Palestine Liberation Organization, which Israel had invaded to displace. That American detachment left in September 1982, but U.S. forces returned later that month when violence resumed.

In April 1983, the U.S. embassy in Beirut was struck by a 400-pound suicide truck bomb, which killed 63 people, including 17 Americans, and wiped out the CIA's Middle East bureau.

On Oct. 23, 1983, terrorists hijacked a water delivery truck on its way to the Beirut International Airport Marine barracks and sent another truck, loaded with explosives, in its place.

Ismalal Ascari, an Iranian, drove the 19-ton truck over the barbed wire fence around the barracks, past two guard posts, and into the center of the compound, according to a federal court order issued earlier this year in a case brought by relatives of the victims.

"The resulting explosion was the largest non-nuclear explosion that had ever been detonated on the face of the Earth," the court order read. It was equal in force to between 15,000 and 21,000 pounds of TNT.

"The force of its impact ripped locked doors from their doorjambs at the nearest building, which was 256 feet away," read the ruling by U.S. District Court Judge Royce C. Lamberth. "Trees located 370 feet away were shredded and completely exfoliated."

All the windows at the airport control tower, half a mile away, shattered. A crater eight feet deep was carved into the earth, and 15 feet of rubble was all that remained of the four-story Marine barracks.

"The force of the explosion ripped the building from its foundation. The building then imploded upon itself," read a Defense Department report on the attack. "Almost all the occupants were crushed or trapped inside the wreckage."

A U.S. investigation blamed lax security for allowing the bomber to get into the Marines' compound.

Lamberth ruled in May than Iran was responsible for the attack because of its support for Hezbollah. "It is beyond question that Hezbollah and its agents received massive material and technical support from the Iranian government," Lamberth wrote.

2nd major quake hits Turkey after first kills over 1,300 in Turkey and Syria

Pope Francis says laws that criminalize homosexuality are a "sin" and an "injustice"
Thanks for reading CBS NEWS.
Create your free account or log in
for more features.
View CBS News In
CBS News App Open
Chrome Safari Continue
Be the first to know
Get browser notifications for breaking news, live events, and exclusive reporting.