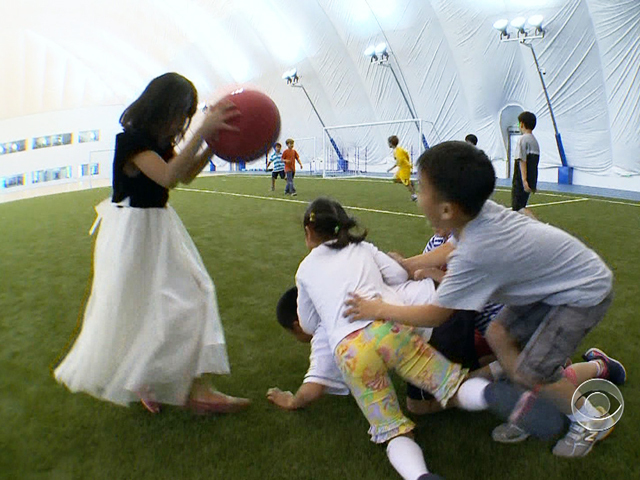 (CBS News) BEIJING -- Murky smog can choke the entire city of Beijing, cutting off sunlight for days. It makes breathing as dangerous as inhaling second-hand smoke.

On these days, Mindy Wu makes sure her 5-year-old wears a mask to school.

People here check the air quality as routinely as others check the temperature. Even what passes for a good day is four times worse than the most polluted city in the U.S., Riverside, Calif.

Last winter, the numbers went off the chart. There were at least 38 days when the air quality was so bad that state media warned residents to stay indoors.

The smog is made worse by the coal-fired power plants that ring the capital, spewing out sulfur dioxide and pollutants that can cause lung disease. It turns mothers like Mindy into amateur scientists.

At the International School of Beijing, pollution tops parents' concerns.

"They would want routine measurements of the air quality in the classroom -- in their son or daughter's classroom - in the gymnasium," says Gerrick Monroe, the school's chief operating officer. "Some have even asked for bus readings."

Monroe showed us a $5 million dome built to enclose a playground and filter the air.

"Our parents were concerned, given the, at times, 10 to 15 days in a row that our kids would be inside and not released for recess," Monroe says. "We needed to have another option."

Watch: China pollution pushing some foreigners out, below.

The school spends roughly $150,000 a year on air filter systems. But the average Beijinger cannot afford that. Mindy Wu has a single, $120 air filter in her bedroom.

Asked if she has considered moving to a less-polluted place, she replies, "Honestly, yes. But it's not a kind of easy decision to make, because moving your home is like moving your whole life to a different place."

The Chinese government set targets for heavily polluting industries to reduce emissions by 30 percent in five years. It's an effort to prevent Beijing from becoming a modern-day forbidden city that no one dares to enter.

Communities take police reform into their own hands