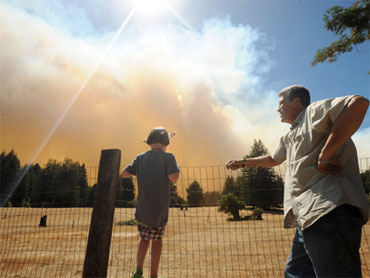 When the CBS hit "Without A Trace" debuted last September, it was scheduled on Thursday nights, opposite the No. 1 show in the country, "ER." What could have been a one-way ticket to cancellation, has turned into a boon. The show has not only survived; it has thrived.

The Early Show entertainment contributor Laurie Hibberd had a chance to visit the set last week.

"Without a Trace" is set in New York City, but is filmed in Los Angeles. So once in a while, the show takes a road trip to the Big Apple to make things a bit more authentic. For Hibberd, it was a chance to talk to some of the stars about the surprise hit they have on their hands.

For Anthony LaPaglia who plays senior agent Jack Malone, working on location with the helicopters, jackhammers and sirens is coming home.

"I lived in New York for 20 years, so it's my home," says the Australian born actor. "I like working on location. It's harder than working in LA. Here it's, you know, 'Hey, what are you doin?' You know, it's like in the middle of a take, some guy, you know, yelling out, asking what your next project is."

For LaPaglia and the rest of the cast, the next project is most likely another season of the show. They play a group of FBI agents who specialize in finding missing people. It's a subject the actors find themselves drawn to.

Poppy Montgomery who portrays Samantha Spade says, "Chandra Levy, I was sort of fascinated by that case and disturbed by it, you know, and more so maybe now. Now, that I'm on the show and you start to see the inner workings and learn about it."

Eric Close, who as Martin Fitzgerald is the youngest member of the task force, says the show has made him more cautious. "I think because I work on the show, I've become much more aware of my surroundings. I keep a closer eye on my kids."

He's not alone. LaPaglia says his awareness has sharpened as well: "You deal with this stuff every day on the show. I mean, you're not any more of an expert, but your awareness level is very up, whenever you hear about someone gone missing."

The show prides itself on accuracy. So it enlists the help of an FBI agent to keep it honest.

That agent is Dennis Bonelli. To make the show as authentic as possible, Bonelli says he reviews every script. "I tell them what is and isn't real," he says. Whether they listen or not is another story.

On several occasions, the TV show has eerily seemed to foreshadow real news events. One episode about a pregnant woman's disappearance was filmed weeks before the Laci Peterson story made headlines. Another episode, about an abducted child's unlikely return, aired prior to Elizabeth Smart's reappearance.

Enrique Murciano, who plays private agent Danny Taylor, says "there's been instances where we've written stories and they actually happen three or four weeks later. And we're like, maybe, you know, maybe people are watching the show and getting ideas."

He says he hopes that isn't the case, but notes it is eerie nonetheless.

And though the cast says that they've learned a lot about the techniques used to find missing persons, they have no illusions as to who the real experts are.

Murciano says, "You learn so much, but you're never an expert because the stakes are never real.