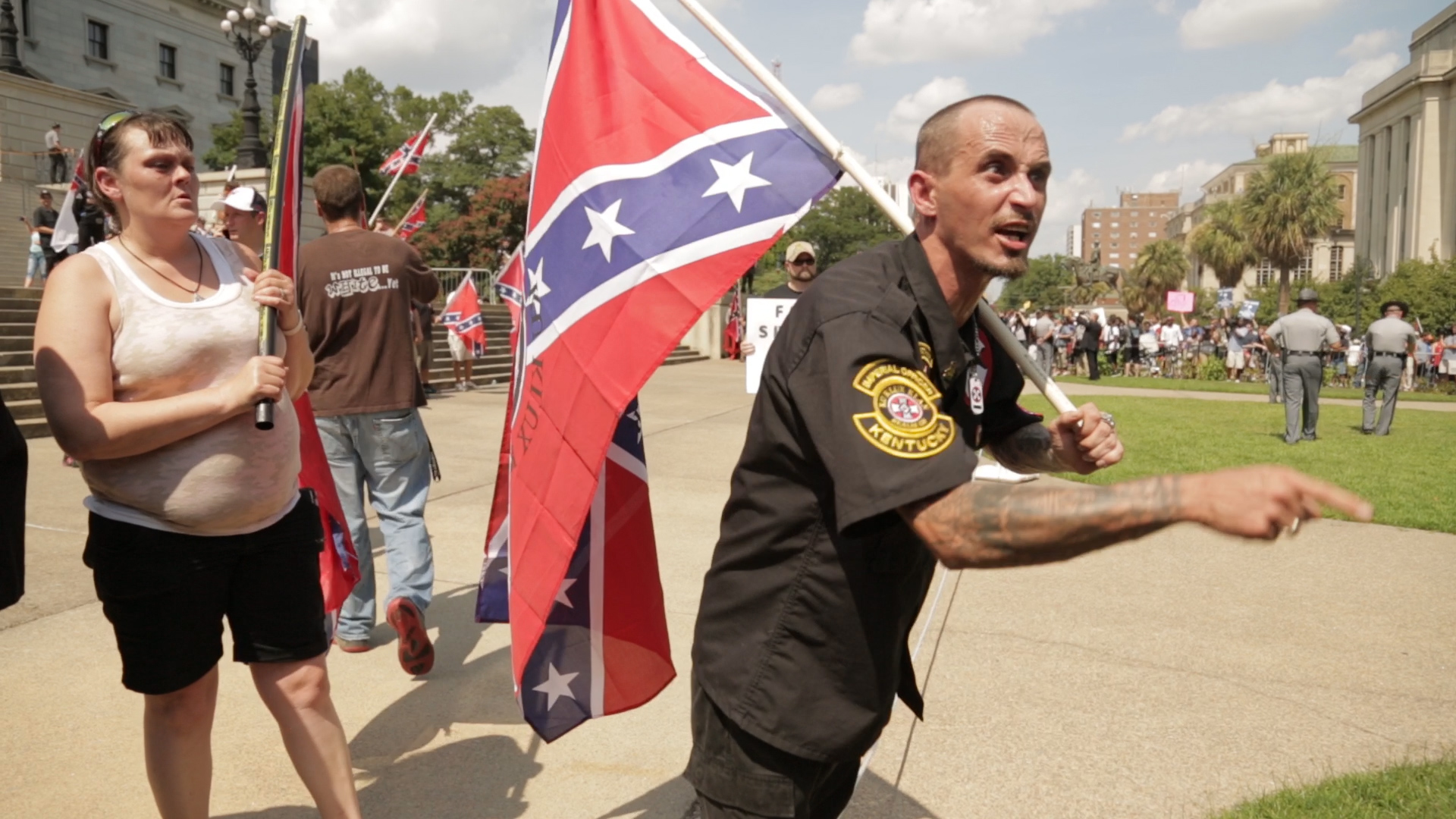 The stifling South Carolina heat did little to keep away mourners and visitors from the Emanuel African Methodist Episcopal Church in Charleston's historic district Sunday. Some wrote messages onto the large plywood sign that reads: "Forgive as we are forgiven." Others took photographs of the dozens of flower bouquets that lined the sidewalk in front of the church, which was sectioned off by several metal railings.

"It's been approximately a month now," said Sunn m'Cheaux, a black activist and "native son of Charleston," as he puts it, referring to the slayings of of nine black victims attending bible study at the church.

A day earlier, in Columbia, the atmosphere was considerably more tense. Members of the Ku Klux Klan descended on the Statehouse to protest the removal of the Confederate flag, an action prompted by the massacre of the "Emanuel Nine." Accused shooter Dylann Roof, 21, was indicted on federal hate crime charges Wednesday. Before his gun spree, Roof posed with the Confederate flag in photos posted to social media.

The New Black Panther Party organized their own rally on the same day, hours before Klan members arrived brandishing Confederate flags and sporting, for the most part, neo-Nazi attire. Other black power activists and black rights advocates were also in attendance. Some threw bottles at Klan members as they marched, surrounded by police, toward the Statehouse.

"The Panthers are supporting wanting to bring the flag down and the Klan's here supporting the flag, wanting [it] to be stayed up because it's a part of history of the South," said David Smith, a former Klan member. "You can only change history so much before ..."

"History repeats itself," Don Ramsey, a friend of Smith's, interjected. The pair had come to the rally at the Statehouse from a small, rural town called Pickens, about a two-and-a-half hours' drive away. As combat veterans - Smith fought in Vietnam and Ramsey in the Gulf War - they insisted the Confederate flag debate was about heritage and respecting fallen Confederate soldiers. Both men also insisted that the Klan rally was about freedom of speech, and that there was nothing wrong with it.

Contrary to the lengthy speeches delivered by a host of black activists, Klansmen delivered no speeches.

"I think that even though we should be concerned with the Ku Klux Klan, what's more important is being able to root out that KKK mentality," said m'Cheaux, who is part of the black power movement. "You cannot have a dialogue ... if it's all just passion and anger and shouting down one another and shouting at one another," he added, moments after delivering an impromptu speech during the rally at the request of fellow activists.

The Confederate flag was removed from the Statehouse in Columbia in early July. M'Cheux said that although it was an "important gesture in its own right," he did not feel that it should be "allowed to be enough for people to feel like they can move on now - without having anything substantial occur."

Meanwhile, in the audience, several Klan members and their sympathizers were criticizing the speeches made by each black activist, most of which highlighted social disparities faced by America's black communities, including the disproportionate rates of incarceration of African-Americans.

"Was you telling me that Obama said we gotta let some of the blacks outside the prison system, to even things out?" said Ramsey, the Klan sympathizer. He turned to his friend Smith.

"I spent 16 years of my life with the Klan," said Smith. "As the years went by, a lot of my views and their views. .. I had to move on." The sixty-year-old became a father for the second time just four years ago.

"I'm gonna teach my daughter that when she grows up, that we are white," said Smith, adding how his daughter was the main reason why he left the Klan, but that the group was no more "bigoted" or racist than black power groups.

"They [the Klan] are good people. ... The people we seen today are working people, they work a 40-hour week, they enjoy a good Christian environment."

Smith said he didn't think the Klan needed to change anything in terms of race: "More I see what's going on with the colored folks, kinda makes you wonder why I got out."

Tensions at the rally peaked when the 40-odd members of the Klan took to the Statehouse steps, brandishing large Confederate flags repeatedly flashing Nazi salutes. Many wore neo-Nazi attire and screamed "White Power!" over and over again.

In one of m'Cheaux's recordings from that afternoon - in which he attempted to interview a couple of young Klan protestors by focusing on fact and not emotions - one particular Kentucky native can be heard saying how all recent events, including the flag debate, are really about heritage, not racism. Moments later, the same man proudly stated that his ancestors fought the War alongside Nazis in Germany: "They put Jews in ovens."

Several minor fights broke out between Klan members and black power activists throughout the day, culminating in members of the Bloods gang running the Klan off the Statehouse grounds. Klansmen were chased by hundreds of critics to a nearby parking garage and surrounded.

From a rooftop overlooking the scuffle, Smith teared up: "I feel hurt - I feel really hurt." He expressed disappointment and anger at the Klan not getting "fair or equal" treatment, as "a lot of these people refused to let them speak."

In the parking garage, away from the stage, the media, and black demonstrators, many Klan members expressed their own frustration and anger.

"You ever watch the National Geographics?" asked one middle-aged, heavy-set man with a long gray-haired ponytail, and bushy goatee and sideburns. "You see them monkeys throwing rocks and sticks? Well we have monkeys here today.

"They throw beer bottles and yeah they throw rocks ... they act like the apes that they are."

"It's a feeling of being united amongst white folks, amongst the white race" said Smith. "Same way as when the black folks say 'black power.'"

Back at his house in Charleston the next day, m'Chaeux made the opposite argument:

"Black power has nothing to do with having dominion over someone else, or bringing harm to anyone else. The black power group is talking about self-empowerment."

"When black empowerment groups came here, they organized, they had community forums, they fed people," m'Cheaux continued. " That's the difference between the false equivalency of these black power groups and white power groups."

M'Cheaux said that this "false equivalency" was dangerous because it legitimized a group like the KKK while muddying the reputation and nuances within the ranks of the black power movement, as well as deflecting attention from their real goal:

"Being able to get, I want to say the white majority but obviously there are more than just white and black people, but speaking generally since white people make up the majority of the population and the majority of influence and political sway ... what they (black power movement) want them to do is take a good honest look at not only the black condition, but how they benefit from it and the privileges they have because of it and engender some degree of empathy."

"To figure out how to be part of the process of helping the healing that really needs to be there," he continued.

He's been back to the Church dozens of times over the past few weeks, sometimes to photograph, often to simply to pay his respects. Most of the time he interacts with passers-by. He described how he interviews them about what they think can be done next, "so that this kind of thing never happens again."