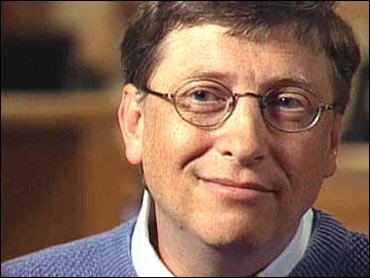 U.S. District Court Judge Thomas Penfield Jackson on Wednesday issued his long-awaited ruling ordering Microsoft to split in two. But anyone who thinks the war between Microsoft and the U.S. government will be over anytime soon doesn't know Bill Gates. Correspondent Charlie Rose interviewed Gates last fall for a story rebroadcast on 60 Minutes II this week. For more on the Microsoft ruling, click here.

Gates, who created one of the world's most valuable companies, is promising years of legal appeals. He continues to believe Microsoft has done nothing wrong.

"I had this kind of naïve, youthful view that if you just ran your company, and did great products, that you know, that's what you were supposed to focus on," Gates told Correspondent Charlie Rose last fall.

"There's a lot of things you need to do (in business)," he said. "But I didn't think one of them was to look over your shoulder at an attack by your own government on your innovation."

But the government says the Microsoft anti-trust case is about protecting consumers.

"The proof is the consumers have been harmed and harmed in very substantial ways thus far," said David Boies, the government's lead lawyer in the case.

"Microsoft is always free to innovate. What we're trying to do with this case is preserve the freedom of other companies to innovate...so that you've got innovation from both sides," he said.

We want "not just a Microsoft world, but a world in which other people are free to innovate as well and the consumer gets a chance to choose," he added.

The case began as a battle between Microsoft and Netscape Communications, which released the first widely used Web browser. Netscape said that Microsoft unfairly used its power to limit consumer choice.

"It's much like in your industry," former Netscape president Jim Barksdale explained to Rose, by way of analogy. "Wouldn't it be a disaster if all television sets came pre-tuned to ABC?"

"If there (were) a lock on the tuners of this world for TV sets, there's a high likelihood that if ABC owned them, that's who(m) it would be tuned to," he added.

"I've been around business for 30 some years," said Barksdale. "I was amazed at some of the tactics that were relayed back to me by our people in the field that were being taken against us. I could not believe it."

Contrary to popular belief, Microsoft is not arrogant, Gates said. It is fearful and obsessed, he said, but not arrogant: "Every meeting at Microsoft about our products, we're talking about, 'Hey, couldn't we have done this better?'"

"There's no one here who thinks we've got a guaranteed future. And so actually, the strength of what we've done is - is much more driven by humlity than anything else," Gates added.

Asked if the company is paranoid, Gates said, "The phrase is kind of a lurid phrase, (but) the thought behind it is absolutely right."

That kind of thinking made Microsoft a large company. But that mindset also prompted the antitrust trial. Microsoft was so aggressive that some competitors called it an "evil empire." The few rivals not intimidated try to stick it to him at every opportunity.

In the trial itself, Gates didn't help his own case much. The government repeatedly ran clips from a videotaped deposition that showed him to be evasive and even arrogant.

"He was in an environment unlike almost every other environment in which he operates," Boies said.

"He did not control (this environment)," he noted. "No witness controls a deposition, no matter how rich, no matter how powerful. Every witness has to sit there and answer questions."

The government was taking cheap shots, Gates said. "They certainly knew that, because the core of their case had no merit, that in order to create some fireworks, they were going to have to try (to) be as nasty as they could be."

It has been a tough year for Gates. His company is under siege, and his image has taken a pounding. This may be part of the reason he agreed to speak so extensively with Rose.

Over the years, Gates has been called many things. But no one has ever called him stupid. He's always been smart, he said.

Said Gates: "In school, taking tests, I always thought, 'Hey, this is easy.' I always felt sorry for other people taking the tests. Because they were designed for me, not designed for anybody else."

Gates, 44, was born in Seattle; his father was a successful attorney, and his late mother was a prominent community leader. As a boy, he liked to read.

Precocious and exceptionally bright, Gates was told as a child that he had an "attitude problem." So his parents sent him to a psychiatrist for counseling.

"So (the psychiatrist) said, 'What - well what are you up to?'" Gates remembered. "And I said, 'Well I'm having this fight with my parents.'"

"And he said, 'Oh well, that - that's simple. You'll win. You know, you're the kid, they love you, you'll win the fight. You shouldn't be wasting energy on that,'" Gates continued.

"And it really changed my whole mindset and thinking about what was I trying to prove, and really focusing my energy on the outer world, learning new things and stuff," Gates recalled.

By age 13, he was programming computers. A decade later, he and his high school buddy Paul Allen created Microsoft.

As recently as last summer, his personal fortune was worth about $100 billion. Even after a sharp drop in Microsoft stock, he's still worth $60 billion.

Being among the world's richest people is a "mixed blessing," and he is not motivated by money, Gates said. His good friend, fellow billionaire Warren Buffett, agreed.

"There is a lot of playful little boy in him," Buffett said. Playfulness isn't a quality normally associated with Gates.

He is notorious for being intensely driven. Gates can be impatient and has been known to snap at reporters and underlings who ask what he deems to be stupid questions.

But he claimed that he has mellowed, in part because of his wife Melinda, a former Microsoft executive whom he married on New Year's Day, 1994. Contrary to some reports, there is, he said, no prenuptial agreement between them.

Last year the couple devoted $17 billion to their charitable foundation.

They are raising their two children: 4-year-old Jennifer and Rory, born last summer. Family pictures fill his office, and Gates said he doesn't spend as much time there as he used to. He goes home earlier than he used to, he said.

Gates did not reveal how much it cost, but said the figure is less than the reported $75 million. The 40000-square-foot mansion on Lake Washington reportedly contains computer-generated artwork, a trampoline room and an indoor pool that plays music under water.

"I feel a little bit guilty about those things," Gates said. "They're not necessary for a family house. I have all these resources, that in a sense, are society's resources."

"And so for any bit that I consume that's part that I'm not putting into health programs, or scholarships or things like that," he added.

He claimd he will give away most of his fortune during his lifetime and that his children will inherit a mere $10 million each. That's small change for a man who has more money at his disposal than many countries, no matter how the Microsoft case finally ends.

"Who am I to complain?" Gates said. "I do feel like there's some unfair things that have happened to me. But on balance, I'm very, very happy." Pressed, he admitted with a laugh that he has this attitude "most of the time."