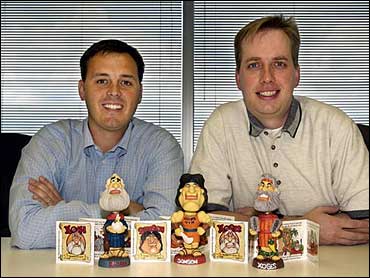 So he took a cue from the latest marketing trend in major league sports and, with his partners, started a business that makes bobblehead dolls out of the men and women of the Bible.

Now he and his partners are selling 7-inch versions of Noah, Samson and Moses for $14.99 that come with a comic book summarizing each of their stories. If those dolls are strong sellers, Queen Esther, Daniel - and possibly Jesus - could be produced next, Foote said, although another company already sells a Jesus bobblehead.

"We want to create a hunger to go to God's word to learn more about these people," said Foote, a 43-year-old Christian cartoonist.

Foote, his brother Darren, and Darren's brother-in-law, Andy Dabney, call their company Isaac Bros., and ship the wobbly necked statues out of Louisville.

The dolls have the requisite oversized heads on small bodies and their features are caricatures instead of reverential portraits.

Moses clenches his teeth inside his oversized mouth, while holding a tablet in each hand. The Roman numerals for the Ten Commandments are on the stones and a goofy-looking snake is wrapped around his ankles.

Samson has bulging biceps and sports a T-shirt that reads, "God's Gym," while Noah looks up to the sky forlornly, with an umbrella crooked on one arm and a dove cupped in his hand.

The cover of each comic book has a drawing of the bobblehead and notations for relevant Bible verses beneath their faces.

The dolls went on sale about six months ago at Louisville's giant Southeast Christian Church and about 300 were sold around Christmas, Darren Foote said. He manages the Bible bobblehead Web site, where the figurines also are for sale.

"The Bible is so much more than horrible stories and what we're not supposed to do," Dabney said.

Dan Foote, who lives in Allen, Texas, came up with the idea two years ago when he and a friend were at a Texas Rangers game. Fans were given bobbleheads of former Rangers catcher Ivan "Pudge" Rodriguez and Foote's friend said he should consider making the dolls himself.

Bobbleheads became a national craze in the 1950s and have recently regained popularity, mostly depicting sports stars, though some entertainment figures have been depicted as well. The Rolling Stones' Web site recently offered a bobblehead Mick Jagger, for instance.

Foote said it would be too expensive to get permission to use a celebrity image, then joked that he could make bobbleheads of someone who didn't need to be licensed, such as a long-dead literary figure or biblical prophets.

Six months later, he got serious about the idea.

"We should be celebrating Bible heroes as much as we celebrate sports heroes," Foote said.

Dabney, who works in printing and production of promotional products, put Foote in touch with Anaconda Sports in Lake Katrine, N.Y. The company liked Foote's drawings and connected him with their manufacturer to help turn the sketches into one-pound, polyresin dolls.

Dan Foote said he expects criticism of his venture and knows that some will consider the dolls sacrilegious.

"They are meant to be fun, but we're not making fun," Foote said.

The comic books don't reveal the fate of the main characters to encourage the consumer to read the Bible to learn more.

Bob Waliszewski, director of youth and pop culture for Focus on the Family, the Colorado-based national Christian ministry led by James Dobson, believes most people will understand that the bobbleheads are not meant to mock the characters.

And they won't fault Foote for selling religious products for profit, Waliszewski said.

"No one has a problem with the jeweler down the street who sells gold crosses," he said.