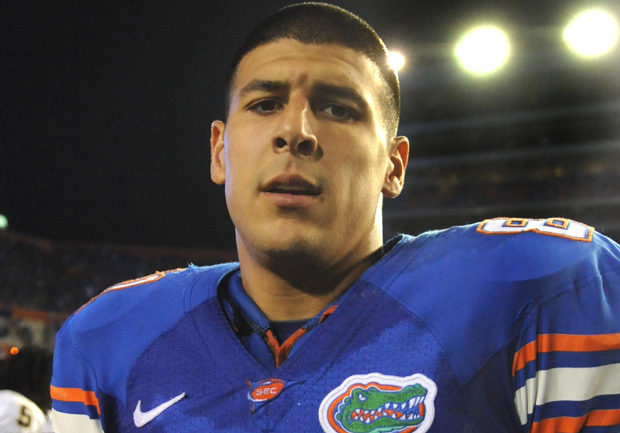 BOSTON When Aaron Hernandez first went before a judge to face a murder charge, a defense attorney said the former New England Patriots tight end had never been accused of a violent crime. But Hernandez is apparently no stranger to violence.

Since he was arrested last week in the shooting death of a friend whose body was found a mile away from Hernandez's home, a portrait has emerged of a man whose life away from the field included frequent encounters with police that started as long ago as his freshman year at the University of Florida.

An acquaintance who sued Hernandez, claiming he was shot after a fight in a strip club earlier this year. A 2007 bar fight that left a restaurant worker with a burst eardrum. An unsolved double killing at a Boston nightclub last summer. All violent incidents, all with possible ties to the once-dominating athlete who now sits in a private cell for his own protection.

Hernandez has pleaded not guilty in the shooting death of 27-year-old Odin Lloyd, whose body was found June 17 not far from Hernandez's North Attleborough, Mass., mansion. His defense team has called the case circumstantial and said Hernandez looks forward to clearing his name.

Authorities searched a Franklin condominium Hernandez had rented and found the same caliber ammunition used in Lloyd's slaying and a white hooded sweatshirt and a baseball cap similar to those Hernandez was allegedly wearing that night, according to search warrant records in Wrentham District Court.

But even before the 23-year-old's recent arrest, public records and interviews show he had been involved in police inquiries in the past, first in Florida and then in the Boston area.

A sworn court complaint from Florida's Eighth Judicial Circuit details Hernandez's apparent involvement in an April 2007 fight at a restaurant called The Swamp in Gainesville. The partially redacted document says the restaurant worker told police that Hernandez, who was then 17, punched him in the head while he was escorting the subject out of the business after a dispute about payment of a bill.

Tim Tebow, now a member of the Patriots and at the time Florida's star quarterback, is listed as a witness. The report said Hernandez asked him to intervene in the verbal dispute before the assault.

The complaint classifies the offense as "felony battery." It wasn't clear Tuesday how the case was resolved.

Also in 2007, Hernandez was among three Florida football players and another who had gone on to the NFL who were questioned by Gainesville police after a double shooting that happened after a Florida loss. Police said the players provided the information investigators wanted. No charges were filed.

AS CBSSports.com's Ryan Wilson notes, Hernandez left the University of Florida as a Mackey Award winner (given annually to college football's best tight end), but concerns about his behavior away from the game saw him last until the fourth round when the Patriots finally drafted him.

A request for comment left Tuesday evening with a spokesman for Hernandez's legal team was not immediately returned.

Although Hernandez is facing a murder charge, his current legal troubles may not end there.

Police in his hometown of Bristol, Conn., said Tuesday that Boston police asked for their help with a double homicide investigation linked to the former NFL star.

Bristol Police Lt. Kevin Morrell said the request was based on evidence developed through the investigation of Lloyd's slaying. He said police were asked to search the same home in Bristol for both investigations, and they seized a vehicle at the address Friday.

Boston police have declined to comment on whether Hernandez is being looked at as a possible suspect in that case.

Over the weekend, a man who is reportedly married to Hernandez's cousin was killed in a car crash in Connecticut.

Thaddeus Singleton III, 33, of Bristol, was driving the car when it went airborne early Sunday and crashed into the wall of the Farmington Country Club, becoming lodged 5 feet above the ground, police said. They said the car was registered to a man, reportedly Hernandez's uncle, whose home has been searched several times, most recently on Tuesday, and from which the vehicle was seized on Friday. A 27-year-old female passenger was injured.

Authorities said the investigation into the crash would take a significant amount of time, but Farmington police said they had no knowledge that is was linked to the Hernandez case.

Hernandez has been connected to still more incidents involving guns, although none has resulted in criminal charges against him.

A man who claims Hernandez shot him in the face in February after an argument at a Florida strip club filed a civil lawsuit days before police arrested Hernandez.

Plaintiff Alexander Bradley claims Hernandez shot him with a handgun, causing him to lose his right eye. But after someone found the Connecticut man bleeding in an alley behind a Palm Beach County store following the sound of a gunshot, he told police he didn't know who shot him and gave only a vague description of possible assailants.

Bradley's lawyer, David Jaroslawicz, wouldn't comment Tuesday about the nature of the alleged dispute between his client and Hernandez. He said the two flew to South Florida together before getting into a dispute at a Miami club.

The attorney said Bradley, who worked for Stanley Steamer before the shooting, had done some work for Hernandez and that the two also hung out socially a few times and had known each other for several years.

"Whether or not Hernandez shot him deliberately or accidentally only Hernandez can tell us and right now he's not doing too much talking," Jaroslawicz said in a phone interview.

Authorities have also linked Hernandez to a May 18 fight outside a bar in Providence, R.I., that involved a gun.

A prosecutor with the Bristol County district attorney's office has said that a man who matched the description of a man seen on video with Hernandez on the night of Lloyd's slaying was seen putting a gun under a car during the Rhode Island incident.

Authorities traced that gun to a Florida gun shop.

Then following Lloyd's death, police said they recovered a .22-caliber gun about a quarter-mile from the defendant's home — a weapon authorities said was traced to the same store.