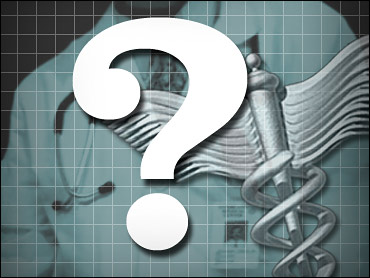 It was a nagging cough that first sent Chuck Pandrea's wife Janet to her family doctor in Florida. She was then referred a specialist.

"It will be four years Sunday that she died," Chuck Pandrea says of his wife. "April 2nd. And to this day, I keep waiting for her, for her to walk in the door," he says, wiping back tears.

"He confirmed that she had non-Hodgkin's lymphoma in the very early stages. And the sooner we could start treatment, the better it would be," he says of the doctor.

Janet was told she needed chemotherapy.

"I went with her every time to, to the treatments. And she'd be sitting in that chair just religiously thinking it's going to make her feel better, make her better. And it didn't happen again," Pandrea says.

"He told me that she didn't have cancer and never did," Pandrea says. "She had a benign tumor on the, the thymus gland so she got treatments that she didn't need that killed her."

Everyone knows doctors can make mistakes. We have all heard the stories of spectacular medical disasters: giving the wrong medication, operating on the wrong side of the body, even operating on the wrong patient. While they grab the headlines these cases are in fact extremely rare. What could be a bigger problem, less discussed is the problem of misdiagnosis.

Wachter is chief of medical services at the University of California San Francisco. He also co-authored the book "Internal Bleeding, The Truth Behind America's Terrifying Epidemic of Medical Mistakes."

Without an autopsy Chuck Pandrea would never have learned the truth about what really killed his wife, no surprise to Dr. Elizabeth Burton, a medical scholar and director of autopsy pathology at Baylor University Medical Center in Dallas.

"The number of autopsies ought to be increased in hospitals," Burton says.

The nationwide autopsy rate is low, only 6 percent of deaths are autopsied. But even of that small percentage, Burton says experts find a 40 percent misdiagnosis rate.
"Out of those 40 percent, about 10 to 12 percent are significant. In that -- had that diagnosis known -- been known prior to death, at a minimum, the patient probably could have been discharged alive from the hospital during that hospitalization," she says.

What's more, despite all the advances in modern medicine, the rate of misdiagnosis hasn't essentially changed in 100 years and while autopsies are the best way for doctors to learn from what they missed.

"Hospitals with higher autopsy rates have lower error rates," Burton claims. "And it's -- there's an inverse correlation for each 10 percent increase in autopsy rate, there's about a 12 percent decrease in error rate, which is fascinating."

But as you might expect, doctors haven't embraced the problem of misdiagnosis. After all the doctor is always right.

There is no requirement to report misdiagnoses and no national data bank. As a result, Graber says there's almost no way to know how often misdiagnosis occurs.

"Let's say it's some small number like, 1 percent. If, if you think about the United States where 10, 20 million people are receiving medical care at any one time, 1 percent of a big number is no longer a small amount," Graber says.

"They missed a secondary infection and she ended up in intensive care. That was a near fatal mistake diagnosis," Maude says.

He established a company in London called Isabel to develop computer software that helps diagnose children's diseases. It is now being used by doctors here.

"All they simply need to do is just put in patient's age, gender and put in symptoms of that patient. Hit the button and he is given a list of diagnosis to think about. Essentially, it jogs his memory," Maude explains.

Dr. Larry Weed is a pioneer a maverick who bluntly says doctor's brains can't do it all. He's has his own computer system named PKC.

"The problem is the doctors were given to believe -- you can learn all this at one point in time; keep it in your head; and pull it out when you need it," Weed says and adds, "Well, that's just not true."

He says the medical schools are the root of the problem.

"They're trying to move knowledge from its source in libraries and laboratories to that patient without a mistake by putting it in people's heads," Weed explains. As evidence that this method does not work, Weed says doctors became more specialized.

"Specialization -- if a patient comes in and says they have chest pain, and there are 100 causes, which specialty? That's why we have this black humor in medicine," Weed says. "A patient took 12 weeks to get an appointment in a fancy place in Boston. She gets in there and she says, 'Oh, doctor, I'm so glad I got to see you. I understand you're the best doctor in Boston for what I have.' And he said, 'Lady, oh I hope that you have what I treat."

The medical community isn't the first to confront the painful reality that errors are common and can kill. In 1977 two passenger planes crashed on the runway while taking off in Spain's Canary Islands, killing 588 passengers and crew. According to Dr. Wachter, the airline industry treated this as a wakeup call overhauling everything from cockpit design to how flight attendants, air controllers and pilots interact.

Medicine can do the same, Senay says.

"When you walk into the modern American hospital, you'll see people talking to each other in a thousand ways. Every operating room looks different," Wachter says.

Standardizing work environments is one way to reduce all medical errors, including misdiagnosis.

"I'm gonna get on a plane in a few hours and I know the food will stink, but I'm pretty confident that they're gonna get there safely," Wachter says.

"And I would not have that same level of confidence if I checked into the hospital across the street."

Again, physicians do get it right most of the time. And unlike passengers on an airplane, patients don't have to "sit back" and rely only on pilots:

"They need to have a more accurate perception that we're always just playing the odds in medicine," Dr. Graber says. "Every once in a while, I think it would be healthy for the patient to ask the doctor, "OK, you think disease x. Is there anything else this could possibility be?'"