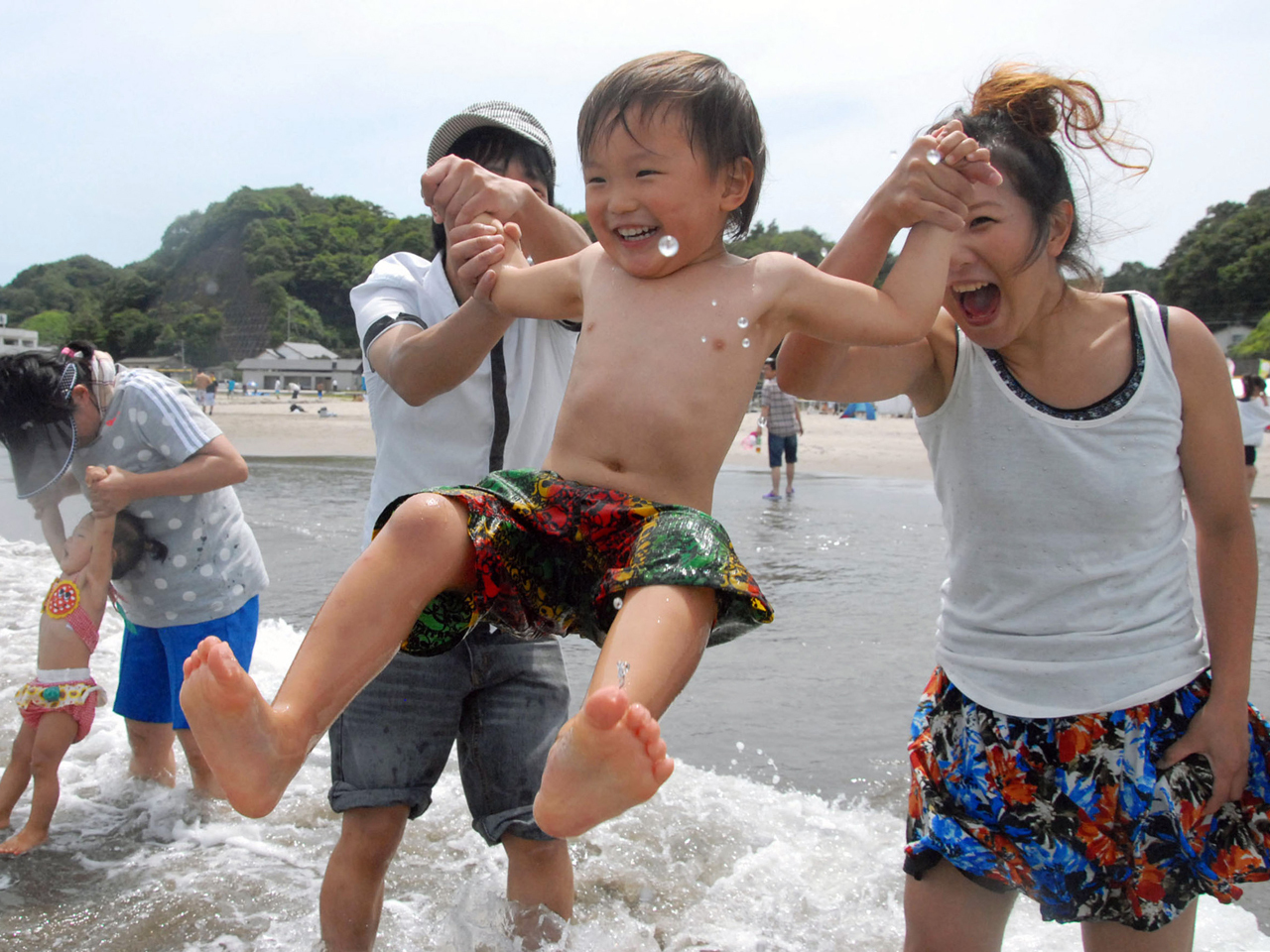 (CBS/AP) TOKYO - Fukushima prefecture (state) has opened its first beach to swimmers since last year's nuclear disaster after judging the water to be safe.

About 1,000 people on Monday descended on Nakoso beach, about 40 miles south of the Fukushima Dai-ichi nuclear plant, where three reactors melted down after the March 11, 2011, earthquake and tsunami.

The opening was celebrated with beach volleyball games and hula dancers from a nearby spa.

Swimming had been banned at all beaches in Fukushima prefecture (state) since last March's disaster.

The beach was reopened as tens of thousands of people rallied at a Tokyo park Monday demanding that Japan abandon nuclear power as the country prepares to restart another reactor shut down after last year's tsunami caused meltdowns at the Fukushima power plant.

Japan ordered all its nuclear power plants shut down for safety inspections after last year's March tsunami and earthquake set off multiple meltdowns at Fukushima Dai-ichi plant. Some 150,000 people evacuated from a 12-mile zone around the plant because of radiation fears, and the area is deemed unsafe to live in more than a year later.

The world's second-worst nuclear accident after Chernobyl has deeply divided Japan, which had been previously bullish on nuclear technology.

Monday's rally at sprawling Yoyogi Park was the latest and among the biggest — drawing possibly as many as 200,000 people, according to organizers — in a series of large protests that is unusual for normally reserved Japanese.

"We want to leave a world without nuclear power for our children," said hospital worker Takeshi Shinoda, wearing a "No Nukes" T-shirt and strolling with his 3-year-old son in a long line of demonstrators.

The movement's leaders say they have collected 7.4 million signatures for a petition demanding a phase-out of nuclear power.

Until last month, when Prime Minister Yoshihiko Noda decided to restart the reactor at Ohi plant in central Japan, all of this nation's 50 working reactors had been offline. The second reactor at Ohi is set to go online later this week.

Noda has said some nuclear energy is needed to ensure an ample power supply and protect people's livelihoods. Japan's economy is still struggling after last year's disaster, and the towering costs of oil imports to fuel non-nuclear power plants threaten to derail its fledgling recovery.

Critics are not convinced, saying Japan has done fine without atomic energy for more than a year.

The demonstrators also said they were offended by a parliamentary investigation that blamed Japanese culture for the Fukushima disaster.

The report, released earlier this month, said, "Its fundamental causes are to be found in the ingrained conventions of Japanese culture — our reflexive obedience, our reluctance to question authority, our devotion to `sticking with the program,' our groupism and our insularity."

Midori Tanaka, a schoolteacher marching at the park, said the right people should face up to their mistakes.

"Things can never change if we blame culture. We need to get to the bottom of this," she said.

Oe said blaming culture was a cop-out, adding that individuals — including the president of Tokyo Electric Power Co., the utility that operates Fukushima Dai-ichi — should be held responsible.

Addressing the rally from a stage, Sakamoto said it was ridiculous to risk people's lives for electricity.

"Life is more important than money," he said in Japanese, then added in English, "Keeping silent after Fukushima is barbaric."