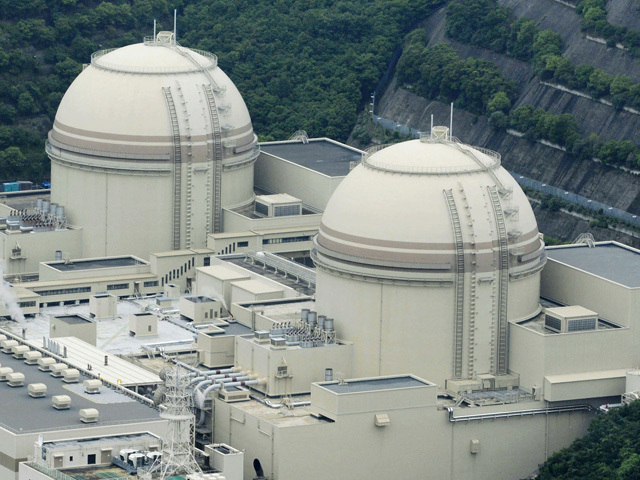 (AP) TOKYO - Nuclear power returned to Japan's energy mix for the first time in two months Thursday, hours before a parliamentary investigative commission blamed the government's cozy relations with the industry for the meltdowns that prompted the mass shutdown of the nation's reactors.

Though the report echoes other investigations into last year's disaster at the Fukushima Dai-ichi plant, it could fuel complaints that Japan is trying to restart nuclear reactors without doing enough to avoid a repeat. Thursday's resumption of operations at a reactor in Ohi, in western Japan, already had been hotly contested.

Government officials and the utility that runs the Ohi plant announced last month that the No. 3 reactor had passed stringent safety checks and needed to be brought back online to ward off blackouts as Japan enters its high-demand summer months. The government hopes to see the restart of more of Japan's 50 working reactors as soon as possible.

"We have finally taken this first step," said Hideki Toyomatsu, vice president of Kansai Electric Power Co., which operates the plant and hopes to restart another reactor there in the few weeks. "But it is just a first step."

The reactor is the first to be restarted since last year's devastating tsunami inundated the Fukushima plant, setting off meltdowns in three reactors in the world's worst nuclear crisis since Chernobyl in 1986. All of Japan's reactors were gradually taken offline for maintenance or safety checks, and in early May the last reactor shut down, leaving the country without nuclear-generated electricity for the first time since 1970.

The report released Thursday said the Fukushima disaster was "man-made" because it should have been foreseen and avoided.

It said the response "betrayed the nation's right to be safe from nuclear accidents," and was the result of collusion between the government, regulators and the utility itself that allowed lax preparation and precautions.

The 10-member panel, appointed by parliament in December, interviewed 1,167 people in hearings exceeding 900 hours. Members also inspected Fukushima Dai-ichi, the neighboring and less-damaged Dai-ni plant, as well as two other plants in nearby prefectures.

Its bulky final report urged parliament to monitor a new regulatory agency and supervise reforms in the crisis management system. It also urged the government to set clear disclosure rules about its relationship with nuclear operators, construct a cross-monitoring system and overhaul laws governing nuclear energy "to meet global standards of safety, public health and welfare."

The commission's report is likely to complicate government efforts to get more reactors going. Over the past month, large demonstrations against restarts have been held each week outside of the prime minister's office, reflecting deep grassroots opposition. Before the crisis, Japan got one-third of its electricity from nuclear plants.

Experts and activists have criticized Prime Minister Yoshihiko Noda's government, saying it is putting business ahead of safety by going forward with the resumption before studying the findings and recommendations in the report.

Other groups, including a private probe panel, have also issued lengthy studies detailing a serious lack of communication between the government and the Fukushima plant's operator, Tokyo Electric Power Co. — or TEPCO — along with a failure by both to provide the public with important information on radiation leaks.

Thursday's report also raised the question of damage to the plant caused by the earthquake itself, though TEPCO, in its own internal investigation, has said it found no evidence of major quake damage.

It claims the unanticipated size of the tsunami was the primary cause, but acknowledges its tsunami plans were too optimistic and initial communications were problematic.