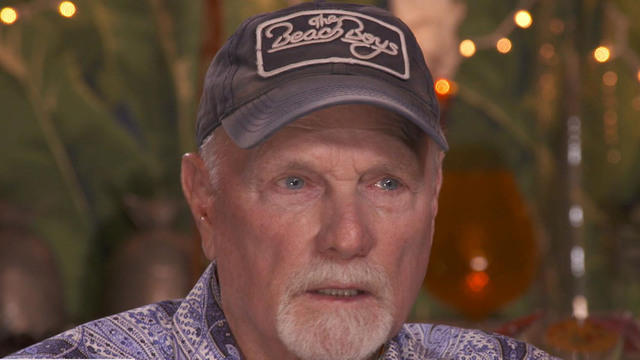 Fifty years ago, the Beach Boys rode “Good Vibrations” to number one. Lead singer Mike Love said he actually wrote the lyrics driving to the recording studio with his then-wife.

“I said, ‘Take this down -- I’m driving along, I love the colorful clothes she wears, and the way the sunlight plays upon her hair,’” Love said.

“Good Vibrations” is now the title of Love’s new autobiography, but the group known for its harmonies has a history of discord.

“When did you interest in singing start?” CBS News correspondent Anthony Mason asked him in a recent interview.

“Well, since I sang together with my cousin Brian when we were little kids,” Love said.

The Beach Boys were a family band, made up of the three Wilson brothers – Brian, Dennis and Carl – and cousin Mike and friend Al Jardine.

Brian, the melodic genius, arranged their intricate harmonies. Mike, the lead singer, often supplied the lyrics, but the Wilsons’ father – who managed the band early on – didn’t give him credit.

“He never put my name on the label copy of the songs, so I never got paid, ror did I get credit for doing like ‘Surfin USA,’ ‘California Girls,’ ‘Help Me Rhonda,’ ‘I Get Around,’” Love said.

“Which led to you ultimately suing,” Mason said.

“That was a painful process, but there was no other recourse,” Love said.

In the mid-60s at the height of the Beach Boys’ success, Brian Wilson abruptly quit touring with the group and retreated to the studio. He produced the band’s highly acclaimed album “Pet Sounds,” but began a long battle with drugs and mental illness.

“There’s a point there where you say you basically lost your quarterback,” Mason said.

“Well, yeah, and more than a quarterback. You lost your best friend, your cousin, you know, because drugs intervened and took him away,” Love said. “It wasn’t the same Brian after the LSD.”

“Did your relationship ever really recover after that?” Mason asked.

“Not entirely. I don’t think so,” Love said.

Charles Manson​ even entered the picture in the late sixties, when he briefly moved into Dennis Wilson’s house with his “family.” Love remembers showing up after a recording session.

Love went to take a shower, and somebody followed him.

For years, the three surviving original Beach Boys - Love, Jardine and Brian Wilson - have each toured with their own bands.

In an interview for “CBS Sunday Morning,” the reunion appeared to get off to a promising start.

“I meant that literally, not in a bad way,” Wilson said.

But the tour later unraveled, in part because Love resented interference from Melinda Wilson, Brian’s wife.

“And your response to that was?” Mason asked.

“Well, I think my response was to turn and leave. That was not a pleasant thing to hear. Because I wrote all these songs with my cousin and as I said before and I still say, if it was just he and I, it would be fine.”

Love said he hasn’t talked to Brian since because “he’s unavailable.”

“For those who believe that Brian walks on water,” Love writes in his book, “I will always be the Antichrist.”

So the cousins have gone their separate ways again. The Beach Boys are playing the same songs but riding different waves.