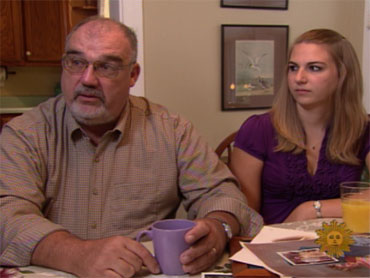 Even in this day and age, one American adult in seven is illiterate. Fortunately, there are ways to escape from that situation. CBS News correspondent Byron Pitts looks at some personal stories of illiteracy, including his own.

Walter Long is 59 years old and lives in the town outside of Pittsburgh where he grew up. He's got a good job with the county water board, a nice house where he has raised four kids, and a wife who loves him.

And for years, Walter Long also had a secret: He could not read.

He faked it well, until one night when he was reading - or pretending to read - a story to his four-year-old daughter, Joanna.

"My daughter looked up at me and said, 'That's not the way mom read it to me,'" Long recalls with emotion. "It's still hard to say to a four-year-old, that you can't read.

Lavonne McKinstry drives a school bus for the greater Pittsburgh school system. Ten years ago she would not have had the job because she couldn't read well enough to pass the driving test. Like Long, she hid her lack of reading skills from everyone - even her daughters.

"I was embarrassed, I was ashamed," McKinstry says. "It hurt."

There are 30 million Americans who are functionally illiterate, which means they cannot read well enough to function effectively, according to a federal survey.

"There are 40 percent of our nation's fourth graders who are not reading at basic level," says Emily Kirkpatrick of the National Center for Family Literacy. "Many of those fourth graders are children of the 30 million who cannot read at the basic level."

Often, children just give up as they fall behind, according to Kirkpatrick.

"Early in a person's life, they're learning how to read or should be learning how to read, and then as life and education progress, you transition to need to read to learn, and it's often when that transition happens, often in the adolescent years, that an individual falls very far behind and is unable to catch up," says Kirkpatrick.

For some the problem stems from a learning disability, many of which were undiagnosed until recent years. Others come from families with parents who struggle with reading, or where English is not spoken.

And for some, like Walter Long, the reasons are not entirely clear, even now.

Long hid his problem for years, painstakingly copying over work orders at home at night, getting his wife to fill out paperwork and applications, and telling his kids he was busy when they needed help with homework.

"It's not something that you walk up to someone and say, you know, 'I have a reading problem, can you help me?'" Long says.

Hiding illiteracy is a common occurrence, according to Kirkpatrick.

"They're very intelligent people because they've figured out how to work around disclosing the fact they they can't read or can't read well," she says.

There are many causes of illiteracy, but the stigma and the shame are the same.

Long recalls hearing certain words like "dummy " attached to his name. Inside, he says, he still hears them today.

Literacy for me is more than just another assignment. I was a student at Saint Katherine's School in Baltimore when I was diagnosed as functionally illiterate. I could not read.

There weren't programs for kids like me back then, so I was placed in the basement with the slow learners. I became one of the "basement boys."

My journey from Saint Katherine's in Baltimore to CBS News is one I have spent time thinking about, and now, writing about.

It's a journey I could not have made without the unshakable help and support of my mother, Clarice Pitts. When a therapist suggested I might be mentally retarded, she refused to give up.

There were others along the way, teachers and mentors, who helped me retrace and re-learn what I somehow missed in my early years, and who believed in me even when I doubted myself.

Today, teachers are trained to diagnose reading problems early, before they become lifelong handicaps. Aniya Walker, for example, is in the second grade at Saint Katherine's, where her reading and speech problems are well on their way to not being problems at all.

She even says reading is fun - sometimes.

High school students at Neighborhood Academy, a public charter school in a tough section of Pittsburgh, have high hopes for the future. But for some it wasn't always that way.

Darius Sullivan, a senior at Neighborhood Academy, says he struggled with reading.

"I definitely struggled in reading and I took it as a joke," Sullivan says. "I knew I was bad and I didn't want to be made fun of."

Kirkpatrick says that children who have a hard time reading feel a lot of shame and often think they are the only ones who are struggling. But the research and statistics show that is not the reality.

The support of teachers and peers made all the difference for Sullivan, who is now considering going to MIT.

"Wow! I mean, I've definitely changed, you know?" Sullivan says. "I can definitely say I look up to myself, you know, look in the mirror."

Today, Walter Long is also proud of his decision to get tutoring and go to classes offered by the Greater Pittsburgh Literacy Council. But it wasn't an easy decision for him to make.

"We sat down with the four children and I said that I was entering the program and I didn't know where this journey would take us, but we're gonna journey together," he says.

His children made sure he stayed on track.

"I'd come home from work, wanna sit down and watch TV, just relax and forget about the day, and they would look at me and say, 'Isn't it time to do your homework?'"

Kirkpatrick has seen this happen many times. She says often a parent will improve their skills to improve the lives of their children.

Lavonne McKinstry says she can do whatever she puts her mind to. The journey hasn't always been easy for her either, but it changed her life.

"It showed me that I can attain some things that I thought was not attainable," she says.

Walter Long's story has a very happy ending. Now he reads books to his grandchildren - the same books he couldn't read to his own kids.