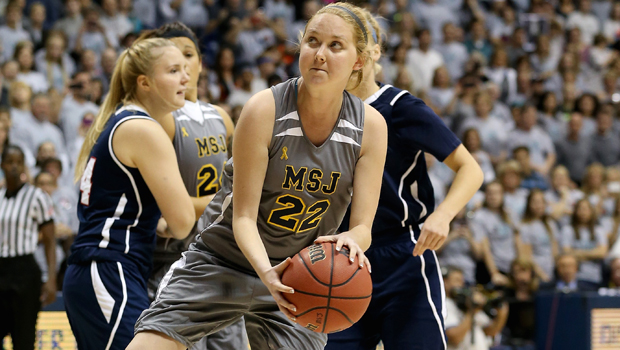 CINCINNATI -- Lauren Hill practices only a few days a week now. It's unlikely she'll play in another basketball game, although she's not ruling out the possibility that she just might feel up to it one day and shoot one of her left-handed layups.

Her cancerous brain tumor makes every day unpredictable. And whatever happens, she's accepted it.

The Mount St. Joseph freshman isn't as strong as she was two weeks ago, when she took the basketball court in the national spotlight. She made a pair of layups -- one just 17 seconds into the game -- during a Division III matchup Nov. 2 in front of more than 10,000 fans who dabbed their eyes as the ball went through the net at Xavier University's arena.

"The game was two weeks ago. It seems like it was just yesterday," she said on Tuesday in her school's gymnasium, with the final score -- Mount St. Joseph 66, Hiram 55 -- displayed on the scoreboard.

A lot has happened in the last two weeks.

After the game, General Mills surprised Lauren by putting her picture on a Wheaties box, joining sports legends like Michael Jordan, Babe Ruth and Mia Hamm who have appeared on the "breakfast of champions."

The school has received calls from people around the world who are touched by her courage and inspiration. A Layup4Lauren challenge raised money for research into the type of cancer that will shorten her life.

Hill hopes that research will lead to treatments that give others a better chance of beating the odds.

Xavier donated $58,776 on Tuesday, money raised from tickets and merchandise as the school offered its arena for the game. The NCAA allowed the schools to move the game up by two weeks because of Hill's condition.

So far, more than $324,000 has been donated for cancer research and treatment -- far more than Hill had imagined.

"That's a lot," Hill said. "I don't even have a reaction. I'm still in shock. It's kind of like walking through a dream. I mean, it's a good dream."

As the inoperable tumor squeezes her strength and energy, Hill squeezes back, holding to life as tightly as she can. The tumor leaves her right side weak at times and makes her dizzy. She sleeps a lot and has to use a wheelchair sometimes.

"Every day or every hour can be different," said Lauren's mother Lisa Hill. "Toward the latter part of the day, you'll see her more in her wheelchair because her legs are weaker so she has a hard time moving."

"If her right side isn't working, she gets very frustrated just because her body isn't cooperating," she said. "But for the most part, she's Lauren."

Hill had to start shooting with her left hand -- her non-dominant one -- because the tumor affects the right side of her body more significantly. She shows up for practice several times a week to be with her teammates and will make a few shots if she feels up to it.

Asked if it's realistic to think she could play in another game, Lisa Hill said, "I don't know. I would probably say it's maybe not realistic, but you never know on the day. So if she's got really high spirits and her body's doing what it's supposed to be doing, who knows?"

Hill doesn't know what to expect, either.

"I'm just worried about spending time with my family right now and trying to get to Thanksgiving," she said. "You know, just living in the moment."

Coach Dan Benjamin and Hill's teammates are taking up the cause as her energy wanes.